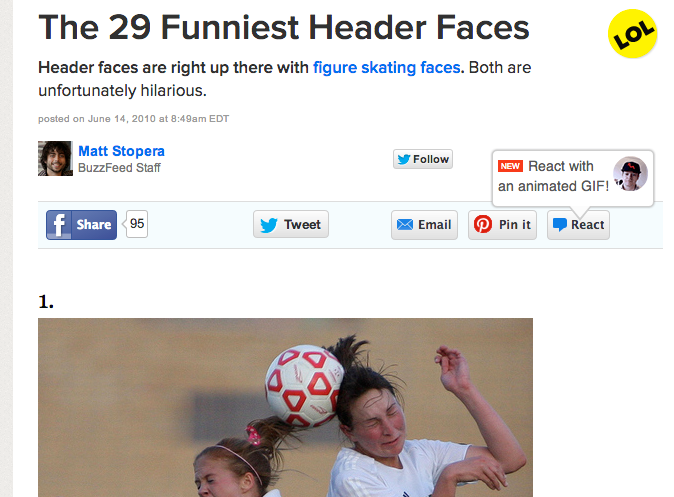 Right now, Buzzfeed is one of the biggest things on the internet. Every month they churn out mountains of content and rake in billions of page views. Some critics, however, believe it to be unsustainable, especially when a considerable portion of the images they use in their now infamous list articles are used without compensation or proper attribution. Now, they’re facing a big lawsuit from a photographer named Kai Eselein. And it’s not the first time something like this has happened.

The offending article was originally called, “The 30 Funniest Header Faces,” and it had all the makings of a perfect Buzzfeed article. A number at the beginning of the headline as well as a superlative (funniest) to help give it SEO juice. A long stream of images that can be whipped through without thought. Plus, it’s pinned to a specific, but very large audience (soccer players and fans) but still has enough of a dumb humor angle to make it appeal to the general public. It’s textbook sleazy internet content creation. I’m not going to link to it. You know how to find it if you want to see it.

The problem was that the images were simply ripped from the web. That shouldn’t surprise you. It’s standard operating procedure at Buzzfeed. Kai saw his image being used and sent a takedown notice to the internet behemoth. They removed the image and changed the title to the 29 Funniest Header Faces. But, Kai realized that his image was now flung across the internet on sites that scrape Buzzfeed’s content. It was out in the wild, often without his name attached to it.

Now comes the lawsuit. The photographer is asking for such a large sum because he says that Buzzfeed isn’t just responsible for their own misuse, but for all the other instances of it being stolen.

The debate about this one will likely be extremely heated. As sites like this get bigger and bigger the demand for content becomes unmanageable. Buzzfeed’s Jonah Peretti has gone on record to say that making lists like this count as fair use, which seems like a copout. Putting things into a pile doesn’t transform the things in the pile. Much of what Buzzfeed is churning out is little more than curated Google image searches.

We’ll be interested to see how it plays out for sure, but for now, it’s a good reminder about how hard one should think about sharing an image. No one has the right to take your images, but that never has and never will stop them from doing so. So be careful. Especially if you take pictures of cats. At this rate, every single picture of a cat ever taken will end up on Buzzfeed, whether we like it or not.