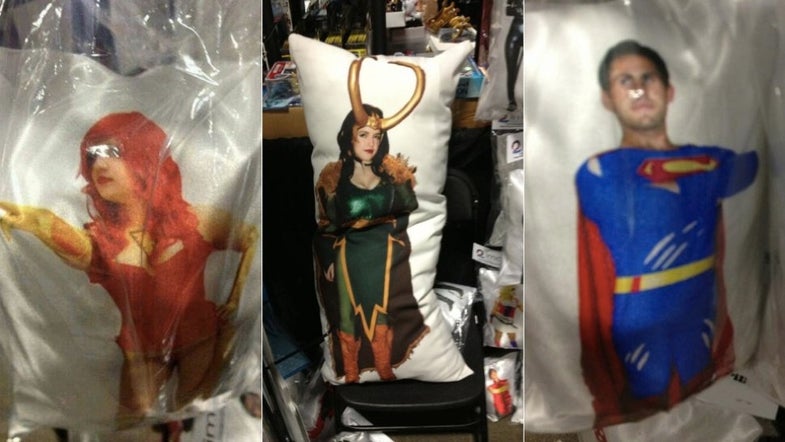 Cosplay is big business. At comic, video game, and anime conventions around the world, thousands of people put hours of effort into crafting themselves costume replicas of their favorite fictional characters. These folks are usually more than happy to be photographed and show off their work. But what happens when those photographs get used in ways you don’t approve of? And what happens when they’re legally allowed to be?

A number of cosplayers have recently found out that not only are their likenesses being used to sell merchandise without permission, but are being used in a rather unsavory way — on body pillows. A body pillow is a pillow about the size of a person, with the printed image of a character or individual on the front and back. While not explicit, they are implicitly sexual, and often feature partial nudity. Which is why it is so shocking that these cosplayers found their front and backsides printed on a large pillow, and offered for sale.

Cosplayers on YouTube and other websites have been complaining about this treatment, and it’s even been picked up by figures like comics writer Gail Simone. But unfortunately, the photographer was probably totally within his rights to make these pillows, as creepy as it may have been.

What happened is that the company behind this mess, 2 Image Solutions, set up booths at various cons, and did 360° animations of cosplayers. He then took the images from the front and back of the photo series, and printed them up on the pillows. io9 talked to one of the people photographed, Dustin Dorough, dressed as Superman above, who admits to having signed a model release form, but also saying “I actually did read over the release before signing and saw nothing in there that seemed as though it could be used on a product…”

Meanwhile, the seller has maintained that the release forms allow him to use these image on products. He also sent out an email to a number of news outlets including what he claims is part of the model release, stating “I hereby give the Photographer / Filmmaker and Assigns my permission to license the Content and to use the Content in any Media for any purpose (except pornographic or defamatory) which may include, among others, advertising, promotion, marketing and packaging for any product or service.”

The fact of the matter is, without seeing the specific release, he’s probably right. Most boilerplate model release forms allow for photographers to sell the image more or less as they chose. And I can imagine that skimming over a contract quickly while waiting to get a photograph taken would make it easy enough to miss a word or two that would indicate that they can use your image in pretty much any way they want.

The whole situation is immensely problematic. Without seeing the specific model release, we can’t be sure what rights the models gave up to the photographer. It’s also not clear if the photographer was using these pillows as “promotional items”, as he claimed at one point.

Thankfully, in the face of this backlash, 2 Image Solutions has removed the items for sale, and will only be offering them to people who want their own photograph printed this way.