Check Out This 6,000 Mile Long Panorama from Space

It may not have the most megapixels, but this is the longest pano we've ever seen 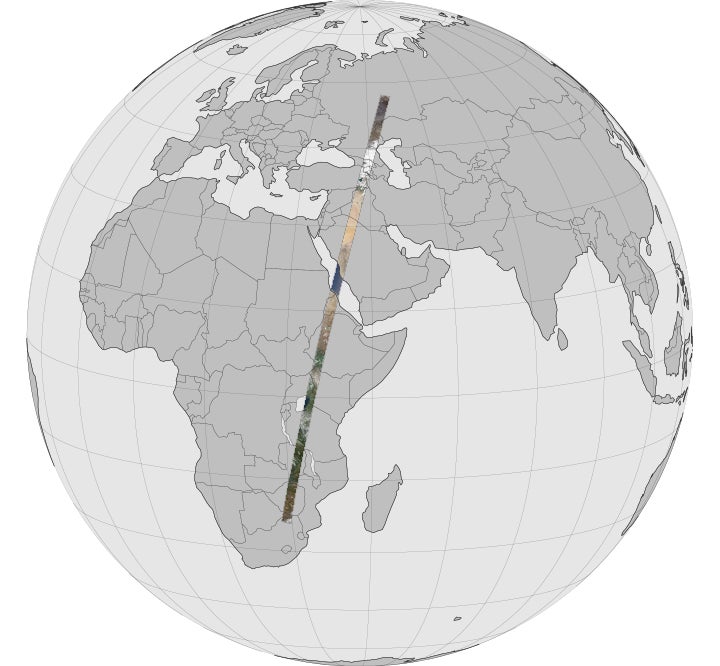 Gigapixel panoramas are becoming increasingly common. We’ve seen them of major cities, famed mountains, and even other planets — so it takes a lot to still impress us. But a 6,000 mile long satellite panorama over a long sliver of the earth’s surface? That’ll do it.

This incredible slice of the planet stretches from Russia all the way down to South Africa, and was captured by the Landsat Data Continuity Mission. Shot in April, this 6,000 mile by 120 mile flyover was recorded from an altitude of 438 miles above the planet. Comprised of 56 still images combined into a single strip that shows the immense diversity of climates on our planet’s surface.

You can watch the flyover in the video below, interact with it on GigaPan, see the full 15-minute version, load it up [on Google Earth](http://Google/ Earth), or view any of the 56 images on their own.

Orbiting at roughly 17,000 miles per hour, the Landsat was able to snap this series of images in just 20 minutes. You can read a bit more about what the satellite saw at the Earth Observatory page from NASA.