Hey, maybe you can get a good deal on a well-used backdrop with a fireplace on it 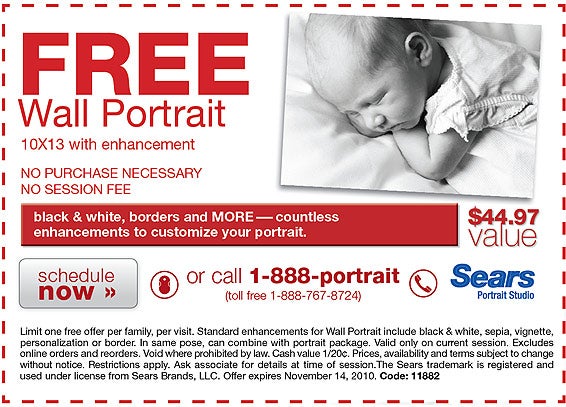 The department store portrait studio has long been a part of our American cultural lexicon. For some families, it’s a tradition, giving them an opportunity to get dressed up and put on fake smiles for cheesy, boring pictures. At one time, some of them were staffed with photographers, but they have long since become a punchline. Now, it has moved two big steps closer to extinction, as Sears and Walmart have shut down their in-store studio programs.

The Sears announcement comes in the form of a rather unceremonious splash page with black text on a white background. “After many years of providing family portrait photography, we are sad to announce our Sears Portrait Studios are now closed,” it says plainly. [ED. NOTE: One of our Canadian Facbeook fans has pointed out that the Sears announcement seems to apply only to their US stores.]

Wal-Mart hasn’t been as forthcoming about their closings, but the report has been confirmed by several news sources. Apparently some stores still use third-party photography vendors that will remain open, so if someone is determined to get their photo taken at Wal-Mart, they might not be totally out of luck yet.

Some people are celebrating the demise of these dinosaurs, and in some ways, it’s understandable. The world doesn’t necessarily need any more photos of awkward families plunked in front of fireplaces. But, it does say something about how willing people are to pay for photography in general.

For some photographers, it might be a good thing. Sure, some families will just head over to JC Penney and Target who seem to continuing their studio offerings. But, some might make the jump to a professional photographer. Unfortunately, they may come bringing expectations in line with the absurd coupons and massive print packages offered by Sears and Wal-Mart.