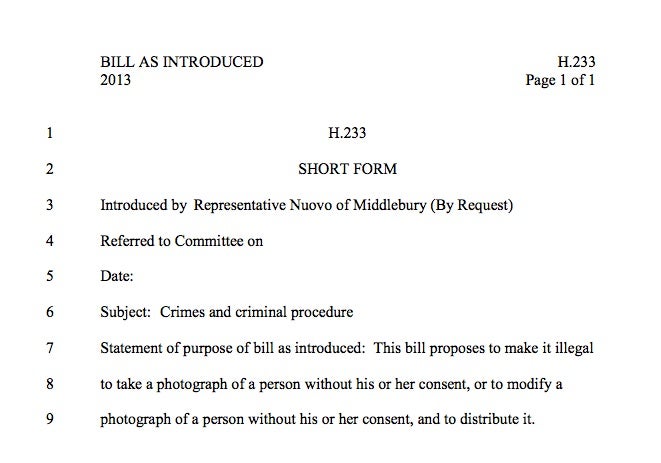 “This bill, H-233, is BY REQUEST it states it right on the bill, look it up under the Vermont Legislature. What that means is that it is not my bill, it is a bill REQUESTED by a constituent who really wanted it so it is a constituents bill, every Vermont Legislator knows this. I do not believe in it but legislators do put in bills that are REQUESTED. This bill is not going to be taken up by the Legislature. Rep. Betty Nuovo”

From the sound of it, the Representative was getting quite a few calls about the issue and wanted to be clear that it’s not going to be happening and that it wasn’t her idea. Glad to hear it.

**UPDATE: **We just talked to a source close to the bill who says it won’t be going forward and is unofficially dead. We’re waiting for official word from Representative Nuovo, which we hope to have soon.

Vermont bill H.233 was proposed in February, and has only passed its first reading. As it exists online, the bill is extremely short and simple:

Proposed [EDITORS NOTE: It was introduced by the representative, but “by request” which she explains in the update at the top of this post] by Representative Betty Nuovo, if the bill makes it into law, it could have long reaching and significant effects for photographers. It could essentially render street photography of any sort illegal, and would force photographers to carry a stack of model release forms with them at all times. And goodness knows what would happen if you decided to touch up an image of a stranger without their express permission. There’s also no mention of how this would affect surveillance and traffic footage.

As it is, there’s a fairly good chance that this proposal won’t make it to law in its current state. A recent New Hampshire bill that would have made aerial photography illegal was substantially rewritten once it was widely reported in its original form. And when Representative Earnest Smith wanted to make obscene photoshops illegal, he was resoundingly mocked across the entire internet.

There’s also the fact that public photography is considered a first amendment right.

Some of the discussion that’s arisen from this story has made a different, and very interesting other point — that we may be misinterpreting the bill from a single line of text. As one Reddit user points out, the use of “and” in the description may be crucial, as the bill might only be aimed to curtail taking a photo without permission and distributing it. But again, for a street photographer who wants to sell prints, they would easily fall afoul of this law.