POV Video: The Making of Making a Tintype Photograph

Ever wanted to see just what goes in to making a wet-plate collodion tintype? 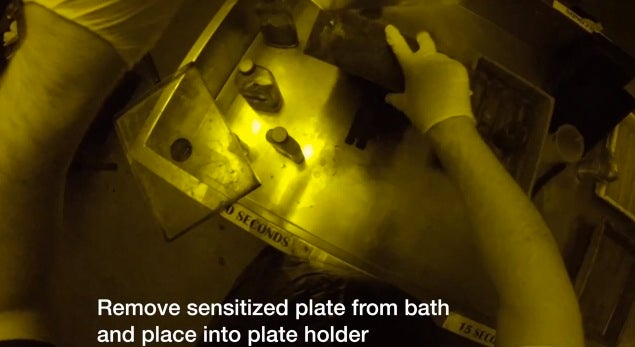 Making a tintype positive is a tricky process, involving the careful dousing of metals to make them photosensitive, exposing them, and then developing and fixing the photo-positive directly on the surface. It’s an exacting art that produces one, final, metal image, with no reprinting. Oklahoma City photographer Mark Zimmerman has put together an video of him going through the process, using a GoPro Hero 3 to capture the entire process from a first-person view.

Zimmerman shoots extensively with collodion processed metals — technically, the video isn’t even a tintype, as he’s exposing on aluminum instead. Zimmerman’s work seems to focus heavily on themes of family and mortality, and he uses his knowledge of analog photography to modify traditional techniques and use them in interesting new ways. For example, some of his work involves intentionally leaving images unfixed so that the photograph disappears with time, and Zimmerman chronicled his wife’s battle with cancer by using the collodion process to print directly onto mirrors, rather than the more common metal plates.

If you’re a fan of tintype photography, there are still photographers who can take these images for you — including the Photobooth store in San Francisco.