How Do You Capture Footage of An Incredibly Rare Giant Squid?

By creating a fake jellyfish, scientists manage to capture the first footage of a Giant Squid 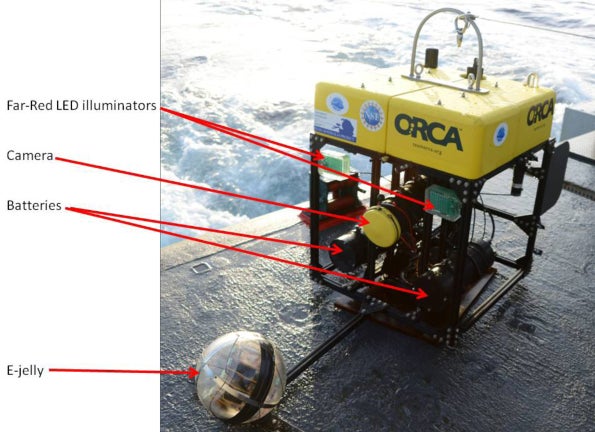 For many years, some thought the giant squid was simply a myth. The later half of the 20th century confirmed its existence though, through washed up remains and squid corpses. Now, the Discovery Channel is showing the first ever live footage of a Giant Squid in its natural habitat — but how in the world did they capture it?

Discovery Channel’s season finale for the program Curiosity is set to debut on Sunday, and with it they’ll finally show the full videos that the channel obtained of this incredible creature. So far they’ve teased a tiny snippet online, and there’s a bit more footage on Nature, but how did they manage to lure the enormous squid out in the first place?

That’s thanks to bioluminescence expert Dr. Edie Widder, who created an optical lure that mimicked the natural bioluminescence of the Giant Squid’s prey. Dubbed the electronic jellyfish — or e-jelly — it was designed to mimic the panicked bioluminescence of the common deep-sea jellyfish Atolla wyvillei. The lure was attached to a special deep-sea camera called the Medusa, and used to gather the footage. You can see footage of the e-jelly doing its thing on the research page.

Previous attempts to record Giant Squids had lead to the first still image of a live specimen in 2004, and footage of one floating on the water’s surface 2006. The Discovery Channel will air the full footage on January 27, 2013 at 8 PM ET/PT as the final episode of the series Curiosity, dubbed “Monster Squid: The Giant Is Real.”