And you thought your Instagrammed shot of your cat was good 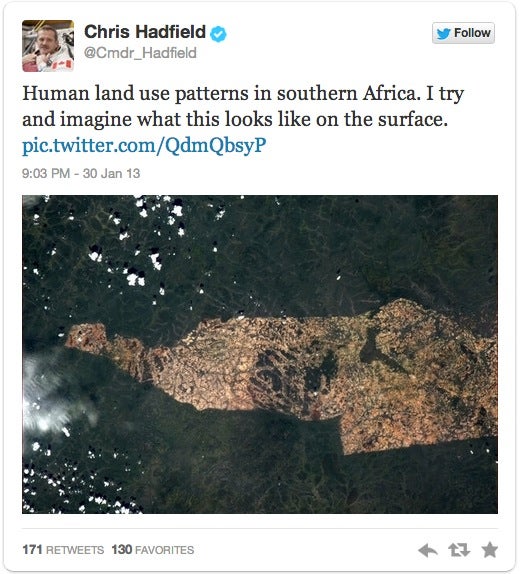 Canadian Astronaut Commander Chris Hadfield already has a job that most of us can only dream of. He’s an astronaut on board Expedition 34 on the International Space Station. But Hadfield has done something to make us envy him even more: he’s posting his brilliant photography to Twitter. Hadfield is a frequent tweeter, and has become something of a social ambassador for the trip, even carrying on a conversation with William Shatner. But it’s his photography that has really wowed us.

His most common subject is, predictably, earth. He snaps photos of cities and nature, capturing some absolutely incredible views. But occasionally, he turns his lens in a different direction, shooting scenes inside the ISS, and out into space.

Hadfield just recently tweeted a number of photographs of the flooding currently happening in Queensland, Australia

Unfortunately, the EXIF data has been stripped from all these images, so we can’t tell you what he’s been shooting with. But given the long and fruitful relationship between Nikon and NASA, it’s a safe bet that’s what he’s using.

Hadfield’s become enough of a star that the Canadian Space Agency is even holding a photo contest for his return to Earth. Just take a photo of yourself with a 2D printout of the astronaut, and you could get a chance to digitally meet the man when he’s back on-planet.