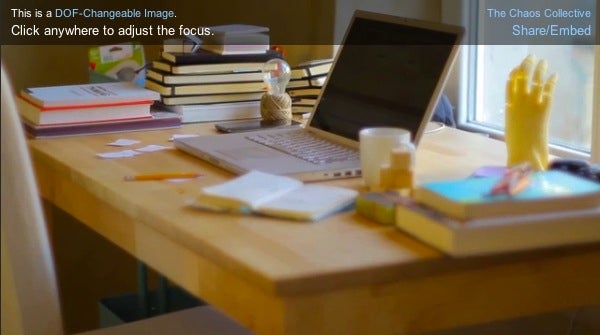 Were you wowed by the ability of the Lytro camera to let you focus your image after you have already taken a photo? It turns out there’s a straightforward way to replicate that same effect using any manual focus camera, and just a few seconds of video. Created by the Chaos Collective, it parses the focus changes in a video file into an interactive image like the ones Lytro makes.

The way this tool works, is that you set up your DSLR on manual focus, and with a tripod. Get your lens to maximum aperture, and focus it as close to you as you can. Then, while recording a video, smoothly alter the focus until you reach its maximum. You can then upload this video to the Chaos Collective website, and their webtool will capture the depth-of-field information from the video, and use it to stitch together an interactive image like the one above.

Now, while the resulting file is quite similar to what the Lytro does, the methodology is extremely different. It’s not the camera storing the direction of all the rays of light in an image, but rather interpolating similar results from a video — which means that you won’t be able to do other tricks, like adjusting perspective. However, as a free workaround, it’s a pretty handy way to get something very similar.