Photographers Can Now Use The Giant, Ugly FBI Anti-Piracy Seal 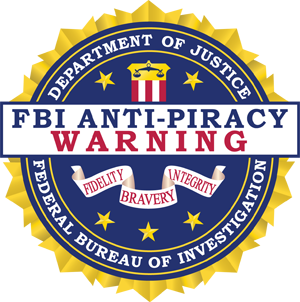 Photographers have to deal with the issue of copyright theft on a shockingly regular basis. Let’s face it, if someone really, really wants to steal your stuff, there’s no real way to stop them. All you can hope to do is make it inconvenient enough to not bother, so we watermark, embed, use Flash galleries, add metadata, and dream up every other trick in the book to try and keep our work as ours.

And now you have another tool. As PDN Pulse pointed out, the FBI has loosened its rules on who can use their anti-piracy warning, so now all US copyright holders can use the seal and it’s accompanying text. There are a laundry list of regulations about how you can and can’t use the image, which are laid out here, here, here (if you click), and here. It seems the FBI is very picky about how you use the seal.

The seal used to be restricted, and found primarily on films and video games — but it now “copyrighted works can include, but are not limited to, films, audio recordings, electronic media, software, books, photographs, etc.”

The thing is, it’s a just about useless tool. It’s not like you can embed it secretly in your images, you have to put it writ large on your site. It won’t do anything to stop copyright theft, except remind people that what they’re doing is illegal, which doesn’t seem to be working gangbusters for DVDs. In the end, it’s a nice gesture, but probably won’t help you much.