PSA: Be Careful When Taking Pictures Of The Sun

Photos of our favorite light source can be beautiful, but they can also do harm to your camera or your eyes 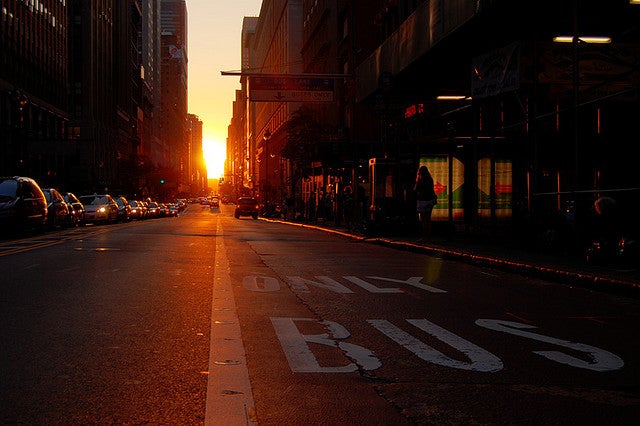 The twice-yearly phenomenon that is Manhattanhenge is once again upon us. Every so often, the sun sets in such a way that it drops perfectly into a canyon created by New York City’s high-rise buildings. It’s the kind of thing we love as photographers. But keep in mind that taking pictures of the sun can — under the right circumstances — be bad for both your camera and your eyes.

To put it simply, your camera doesn’t like getting too hot. Whether the excess heat is from taking long videos or just being in a car that’s too warm, it’s bad for the delicate electronics inside your camera’s body and can cause permanent damage to your sensor. Shooting the sun essentially involves funneling its powerful beams directly onto your sensor through a series of glass elements. The potential for heat is high.

With a DSLR, the mirror gets between the sun and your sensor most of the time. It’s only when the shutter is open that you get direct exposure and it’s usually only for fractions of a second, so taking a few pictures of the sun shouldn’t pose much of a problem. If you’re looking through the viewfinder, though, it can certainly damage your eye, so don’t linger too long.

Smaller cameras, like interchangeable-lens compacts and traditional compacts don’t have the mirror for protection, though. Same thing goes for your DSLR if you have it set to liveview mode. Those cameras use the sensor to give you a preview image, so if the sun is in the frame, it’s being channeled through the lens and right at your chip. It’s easier on your eyes, but a lot tougher on your gear. Leave it on long enough and you could easily cause things to overheat, especially if you’re shooting on a day when it’s already hot out.

If you want to get the shot, stick to short exposures and keep your lens cap on when you’re not actively composing or exposing. Astro photographers often use pricy filters to reduce the effect, but they’re likely overkill for most of us who don’t typically use the sun as a subject.

And since we’re here at the beginning of summer, this seems like as good a time as any to give a reminder that leaving a camera in a hot car is also a bad idea. Delicate plastic pieces can warp, rubber can get deformed, and dried adhesives can deteriorate under the right temperatures. So, keep your camera nice and cool if you want it to live long. Not too cool, though. But that’s best saved for another post….