Like it or not, the biggest photo sharing site in the world is going to get even bigger 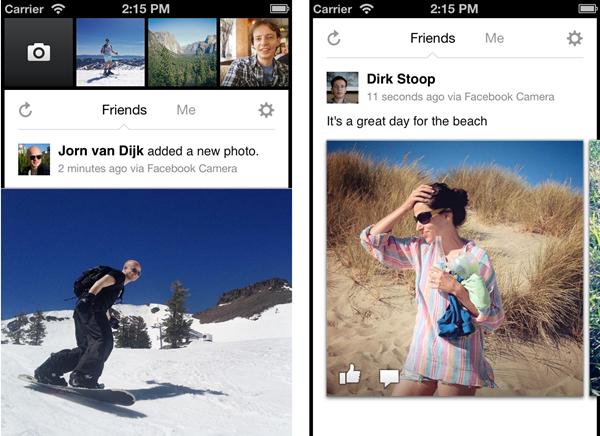 Sometimes I get a bit of blowback from readers when I cover Facebook news here on our beloved photography site, but with literally billions of photos every month being uploaded to the service, it’s impossible to ignore. Now, the fruits of of Facebook’s Instagram purchase are starting to to ripen. First, there was the new Instagram-like layout for their mobile app and now there’s a full-blown Facebook camera app they hope will increase their photo-hosting dominance.

The app itself does a couple things. First, it scrapes all of the photos from your Facebook news feed and shows them to you in a dedicated stream. It’s like using Facebook, only everything that’s not a photo is stripped away. No stupid Farmville updates. No embedded Youtube videos or infuriating posts from Social Cam. Just pictures presented in a pretty nice interface that’s easy to navigate. Yeah, like Instagram.

The other part is the actual camera utility. When you click the camera button you get a familiar-looking camera interface that doesn’t actually give you any more control over your picture taking process. Once the photo is captured, it goes into your photo collection. From there, you can edit it (or any photo that’s already in your library) with a series of filters. It attaches your location and your caption and the likes and comments start rolling in. Social media bliss — or hell. It depends on your outlook, really.

While the filters aren’t my favorite aspect of mobile photography, I do prefer the ones in the Facebook app to most others because they don’t try so much to be “retro.” Many of them seem to focus on tweaking contrast and saturation, though they do often add subtle color casts. Unlike Instagram, it does let you crop and rotate the images, which is nice. Plus, the black and white option is, at least in my opinion, much better than the Instagram Gotham filter, which I always found to be seriously lacking in contrast.

One thing I did notice when I installed the app is that it’s labelled simply “Camera.” Not Facebook camera, but Camera. Just like the native app. Seems telling about Facebook’s attitude toward mobile photography.

In the end, this likely won’t change the way most of us take pictures. The phone is a great tool, but you could always just use the standard camera app and upload to Facebook later if that’s you’re chosen method of sharing.

It’s clear that Facebook is going to be around for a while in the photo sharing space. Even a poll of our readers (conducted on Facebook, actually) showed that it was the primary place for hosting photos, even for some photo nerds. Knowing that, it would be nice if they would spend some more time making photos actually look good on the site.