Charges Dropped Against Photographer Arrested in May Day Protests 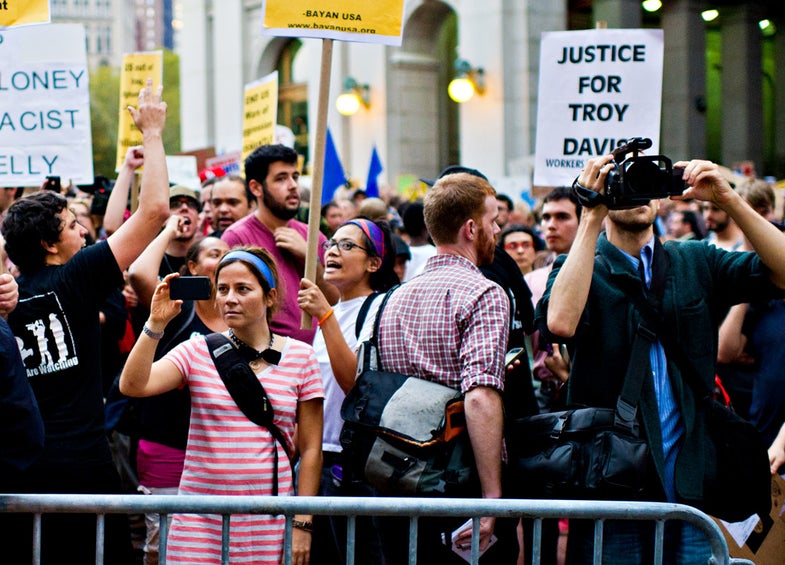 Unfortunately, it’s no longer surprising to hear of a photographer being arrested or even beaten when documenting a public protest. And while we urge photographers to arm themselves with knowledge of their rights (and for their part, police may be armed with cameras of their own to document their side of the story), for the time being, it seems that video evidence from stangers might be a photographer’s best defense.

It was YouTube video segments from witnesses along with footage from a local TV station that Joshua Garland’s lawyer pieced together as evidence to get the third-degree assault charges against the photographer dropped.

As an amateur photographer, Garland has been documenting social-activism events since 2010. He was taking photos at May Day Protests in Seattle where he was arrested and accused of “grabbing a police officer’s hand and twisting his arm.”

His lawyer, Andrea Robertson, said Garland’s hand was on the camera and the other was at his side when the officer approached him. She believes the officer pushed her Garland in the chest and that’s when his hand went up.

After reviewing the video, a spokesman for the county prosecutor’s office said that the prosecutors no longer believe they could prove the case beyond a reasonable doubt.

However, it should be noted, that police and photographers are not always at odds with one another. A couple of months ago, a photojournalist’s image helped police to hunt down and arrest a UK criminal.