Editorial: Let’s All Lay Off the “Oblivious Elk Photographer”

Angry internet commenters might be overreacting. You're shocked, I know 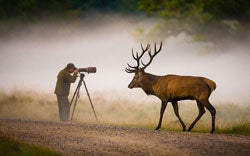 The internet is a fun place. There are all sorts of wonderful and funny pictures to look at, but sometimes we over-simplify things a bit and I think that might be the case with the “oblivious elk photographer” photo that has been going around today. Click here to see the original source.

The photo was shot by the talented nature photographer and workshop instructor, Hans Kruse. According to the web, it depicts a nature photog pointing his camera off into the woods as a rather photogenic elk saunters past him on one side. One can only imagine how much that unlucky shooter slapped his own forehead when he realized what happened. The web is full of people calling him an “idiot” and accusing him of falling victim to “tunnel vision. All that is, of course, assuming he actually wanted to take a photo of that elk.

It’s not uncommon for nature photographers to spend days, even weeks, with their lenses trained on specific locations, trying to get a certain animal in a carefully-selected settings. It’s one of the most challenging aspects of serious nature photography and many of the comments I’ve seen about this photo wholly ignore that. Instead, it seems as though critics are content to sit at our computers and shout, “Dude, there’s an elk right over there, just swing around and take a photo of that one and let’s get a beer.”

To a similar point, a photographer who is spending hours with his camera focused in the same spot won’t necessarily keep his eye at the viewfinder 100% of the time. It’s possible that he was actually in the act of taking a photo of something else when he was captured.

Past that, this is a park that’s full of the animals. During a day of shooting, it’s unrealistic to expect every photographer to rush to photograph every one that walks by. There’s definitely an elk in the frame, but it’s entirely possible there’s another one in front of the photographer’s lens. Heck, maybe there’s a whole family of them doing something really remarkable. That’s not information we have.

There’s also the matter of the lens. The lens cover and the fact that he’s off in the background make it tricky to pin down exactly what lens is under there, but it’s definitely a telephoto lens. And while it could be a zoom, it could also be a lens that’s just too long to get a picture of that animal. If the elk was too close, our photographer would have to pick up his tripod, hustle down the road, re-set up his tripod, and recompose. Probably not worth it.

Even if he had recomposed, he’d have to do so around the photographer that ultimately took the photo of him. There’s no telling how many other photographers or jeeps were in the area, at least not from the information given in the story.

Is it possible that the photographer actually missed the shot? Sure. Can we all use a reminder about resisting tunnel vision from time to time? Of course. But let’s not do it at the expense of the guy in the frame. Cool?