Chris Arnade may be a part of the city’s 1%, but he spends his free time photographing some of the Bronx’s most forgotten residents 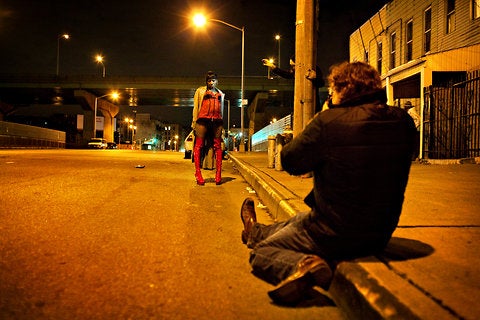 Chris Arnade is a well-paid banker during the week and a photo hobbyist on the weekends, which really isn’t that rare. However, what is more surprising is his choice of photo subject: prostitutes, drug addicts and the homeless. He first went to the Bronx neighborhood of Hunts Point in 2010, as a volunteer at the Hunts Point Alliance for Children. He began talking to the local addicts and prostitutes he encountered and was fascinated by their stories. He then started photographing them and returning with his iPad to show his subjects their portraits and the descriptions of them he had posted online. He also gave them a large color print of their portrait.

He doesn’t try to conceal his day job or salary to his subjects and usually offers them some small form of compensation like $20, food, or cigarettes. He records their stories as they tell them to him and posts their images and captions online. A wealthy Wall Street trader slumming it in the Bronx every weekend photographing people who have hit rock bottom to “relax from the stress of the job” smacks of exploitation, or at the very least, poverty voyeurism. But Arnade makes no claim of being a photojournalist or even having an agenda. What do you think, is he helping to give a voice to forgotten populations or does a wealthy trader have no place taking photos of the downtrodden?