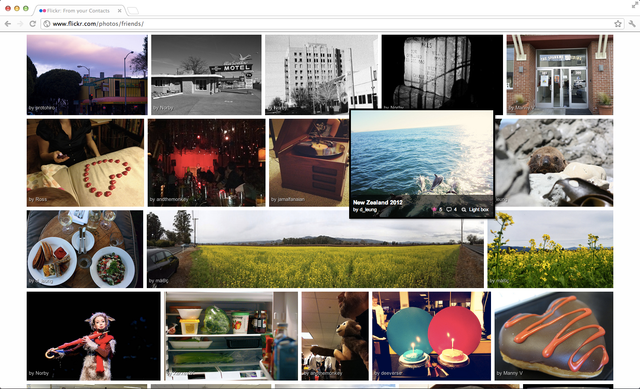 In an interview with Beta Beat, Flickr’s senior product manager Markus Spiering has promised a dramatic makeover for the web-service, bringing it more inline with its modern competition. While many photographers have jumped ship to the likes of 500px or Google+, Flickr’s status as the de facto photo hosting for most photogs puts it in a position of power. However, it has to a certain degree been hampered by an aging interface, which Spiering calls “lots of white space, small photos, lots of information around.” And so, it’s getting overhauled.

The first change will the photo view, and will roll out on February 28. You can see a preview of it with the image above, and it’s a radical redesign, fitting together images of disparate sizes and shapes. At the same time, the upload interface will be changed to be “more like an app than a website,” with drag-and-drop functionality.

Other changes in the works? In January, Flickr already changed prices on Flickr Pro, dropping the cost of a two-year subscription by $5, and adding a $6.95, three month option. Apparently there will also be more emphasis on mobile users, and further unnamed alterations over the course of 2012.