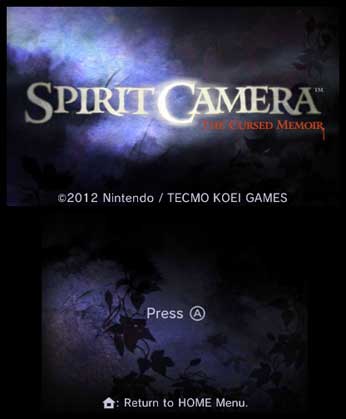 The incredibly successful Japanese survival horror series Fatal Frame has always used photography as a game mechanic — usually requiring you to snap ghosts to defeat them — but for the first time, the newest spinoff uses a real camera to bring the horror. Spirit Camera: The Cursed Memoir is a newly announced title for the Nintendo 3DS, and it uses the handheld’s built-in camera as a major part of the game.

According to the announcement, the game concerns a girl called Maya, who is cursed and trapped in an old house, and who you can view in your own environment using the 3DS’ camera. The game also includes a 16-page augmented reality book, known as the “diary of faces,” which are used to both construct the backstory for the title, and as a source of evil spirits.

The Fatal Frame series and its spinoffs have a reputation for being truly creepy games, so it’ll be interesting to see how well that translates down into a handheld title — but the ability to bring out the horror in whatever environment you’re in seems like an excellent and potentially terrifying game mechanic.