A project appropriately titled, "Photography in Abundance" fills a room with prints 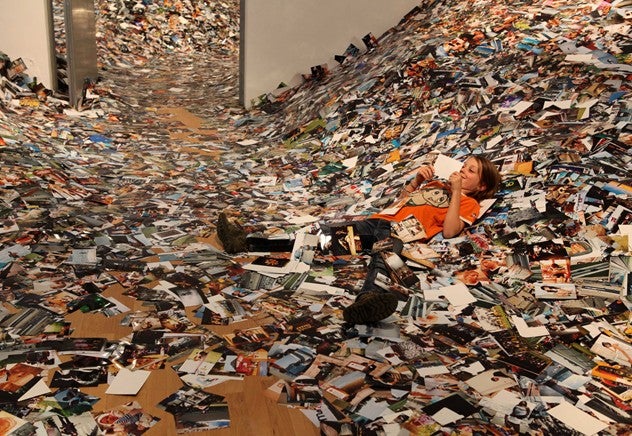 Not long ago, Flickr passed the point where they had over 6 billion photos residing on their service. That’s a lot. In fact it’s more than a lot, but our brains have a hard time making that kind of information usable. In order to help put it into perspective, artist Erik Kessels made a print of every photo uploaded to Flickr on a specific day. The result is over a million images that make up huge piles in the Foam gallery. The project is called, “Photography in Abundance.”

Comments on the project are, as they should be with any interesting art project, extremely mixed. Some people think its brilliant, while others think it’s an enormous waste of resources. In my mind, they’re both right.

Digital cameras and the internet have changed the way we, as a people, interact with photos. That has changed the way we take photos. Many people once believed that a photograph wasn’t finished until it was printed to paper. There are still those who think like that, but with the incredible amount of photographs being created each day, printing even a small percentage of them creates mountains of photographs.

And Flickr is relatively small potatoes in comparison to Facebook, which has stated that they get roughly 6 billion photos per month. It’s almost comical. But, that’s the point of the project. Kessels intended to demonstrate just how buried in images we really are at all times.