The non-profit set up after Hondros' death now has a live website, and will soon start awarding fellowships 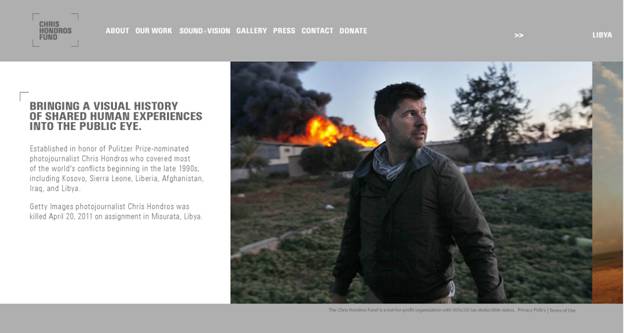 Getty photojournalist Chris Hondros was tragically killed in Libya earlier this year, capturing images of the conflict up until his death. The Chris Hondros fund was set up in his memory in order to “support and advance the work of photojournalists who espouse the legacy and vision of Chris Hondros and raise understanding of the issues facing those reporting from conflict zones through fellowships, grantmaking and education.”

The fund will be offering two fellowships, a series of grants, as well as endeavoring to increase awareness of the issues facing people who report from war zones:

The fund is also hoping to continue one of Hondros’ last project, an audiovisual concert called Sound+Vision: At War, which presents his photography accompanied by the works of JS Bach.

As a recognized 501(c)(3) not-for-profit organization, you can make a tax deductible donation to the fund if you support its goals.