New NASA Shots Show Our Footprints On The Moon 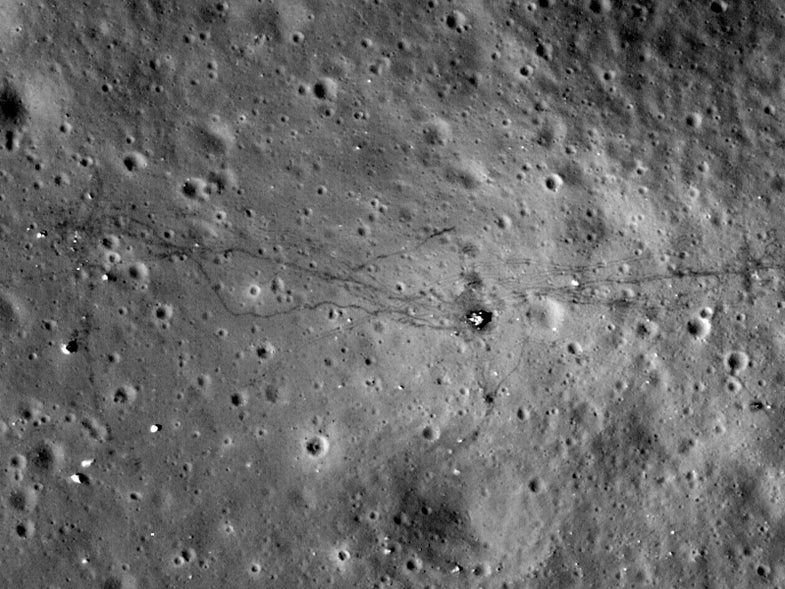 We make no attempt to hide our love for NASA photography here, and one of their always interesting tasks is going back to well known photographs and locations, and using newer and better equipment to show them in a better light. Sometimes this manifests in remastering old images using the original data, and sometimes it involves taking a new look at with fresh eyes. NASA has just released a series of images taken with the Lunar Reconnaissance Orbiter Camera, and the images are high enough quality that you can actually see the trails left behind when the astronauts visited the Moon.

The shot above is from the Apollo 17 mission, where the astronauts also had the Lunar Rover. The rover left behind distinctive dual tracks, compared to the single tracks of individuals hopping across the lunar surface.

Since there’s no atmosphere to disrupt the remains, they’ve stayed there perfectly preserved since the missions departed. NASA also experiences what every photographer knows: there’s more to grabbing these great shots than just a new, bigger sensor:

Waiting for the Sun to hit just the right angle so that the details look perfect, and the exposure is just right? We’ve been there, NASA, we’ve been there.

The NASA release also contains images of the Apollo 12 and Apollo 14 moonwalks.