How do you try and photograph something as big and insane as the Rugby World Cup opening ceremony? By strapping yourself into the rafters 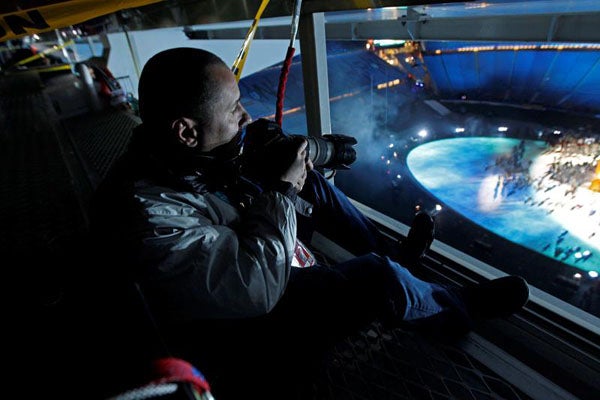 Earlier this month, the Rugby World Cup 2011 started up in New Zealand with an opening ceremony that left everyone slackjawed — so just how did the photographers at the event manage to capture the entire ceremony when it was so big and so bright? Reuters’ Bogdan Cristel was given an elevated view of the action — by being strapped into the stadium roof. With two cameras around his neck and all of his gear locked in with him in the harness so that it wouldn’t crush anyone below, he was able to get the ultimate wide-angle view of the action.

Located just 10 meters in front of the fireworks display, Cristel was afforded an incredible view of the whole field, though after the opening ceremony he came down in order to get a better view of the game that followed.

Between Cristel getting strapped into the top of a major stadium and the likes of Jimmy Chin’s incredible mountaineering photography, it seems that photographers in harnesses is becoming a trend. What’s the next big structure you think we’re going to see a photographer hanging off? Dangling from the Eiffel Tower? Dangling over Niagara Falls? Mid-bungee shooting? I just hope that they all have their cameras well and truly secured.