Gadhafi Had Photobook Filled With Pictures Of Condoleezza Rice

Retrieved from his fallen compound in Tripoli, it seems that ousted Libyan dictator Moammar Gadhafi had an entire book of photographs of former Secretary of State, Condoleezza Rice. 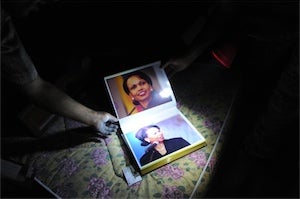 In what is doubtless the most bizarre thing to come from rebel forces seizing the capital of Tripoli, a book belonging to Gadhafi was unearthed, which appears to be filled with nothing but photographs of Condoleezza Rice. Rice famously dined with the dictator in 2008 when the international community was attempting to bring Gadhafi back into the fold, and push for reform.

It appears the Libyan leader has had an infatuation with Rice stretching back even further, and in an interview with Al-Jazeera in 2007, he said “I support my darling black African woman. I admire and am very proud of the way she leans back and gives orders to the Arab leaders … Leezza, Leezza, Leezza. … I love her very much. I admire her and I’m proud of her because she’s a black woman of African origin.”

There’s not really much you can call this apart from really, really creepy.

That said, looking at the book, it seems to have thick, good quality stock, and gold edging on the pages. Classy! I wonder who he got to print it? Head over to MSNBC to see a full size image of the book, plus another shot.