A Chinese photographer lost his gold medal from the Chinese National Photographic Art Exhibition 2010 for a crudely photoshopped version of an existing photo by a different artist. 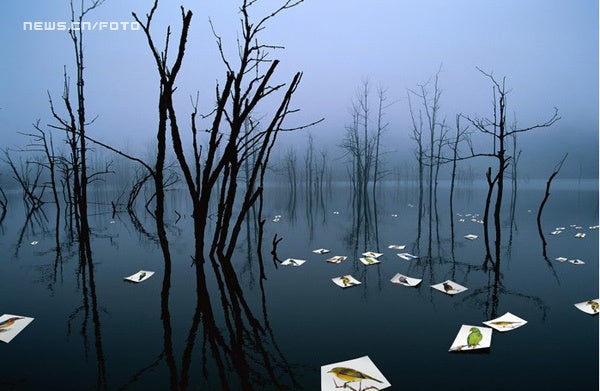 In 2010, Chinese photographer Hou Xie won a gold medal at the Chinese National Photographic Art Exhibition 2010 with his photograph “Tomorrow’s Reality” (明天的现实), an image of misty lake, with spindly trees poking through, and brightly colored images of birds scattered on its surface. The bird pictures were obviously added digitally, as allowed by the competition, but the photographers has had his title stripped from him after it came to light that the original photograph was not his. He had taken the lake image from a stock photo, cropping and tweaking it slightly, before adding further images over the top.

Where this gets interesting is at what point do we consider this a transformative work? Hou claims that he entered the work in the artistic and conceptual category of the competition, which allows for significant digital editing and photoshopping. The competitions organizers, on the other hand, say “the background photograph should be taken by the candidates themselves. It’s a rule that everybody knows.”

While it would be an understatement to say that China is notorious for laxness when it comes to IP, the issue seems remarkably similar to what we’ve been hearing on this side of the planet, too. Late in June the internet storm about Kind of Blue/Kind of Bloop exploded, with remixers siding with Baio and photographers with Maisel. Again, you’re forced to ask if it was a derivative enough piece of art or not. The remixed picture was a hand-made reproduction of the original with a limited palette using large pixels, not a simple downsample. Is that enough to be considered fair use? Is it transformative? If not, does Shepard Fairey get a pass? Theirry Guetta didn’t get one for his graffiti work of Run DMC, but no one’s chasing after the estate of Roy Lichtenstein for repainting old comic panels.

Should adding floating pictures of birds gotten this picture, which significantly changes the message of the photography, be considered enough of a transformation that it’s no longer considered plagiarism?