AP Photographer Fired For Editing His Shadow Out of a Photo

An AP photographer has been fired and banned from working for them again for removing his shadow from a photo. 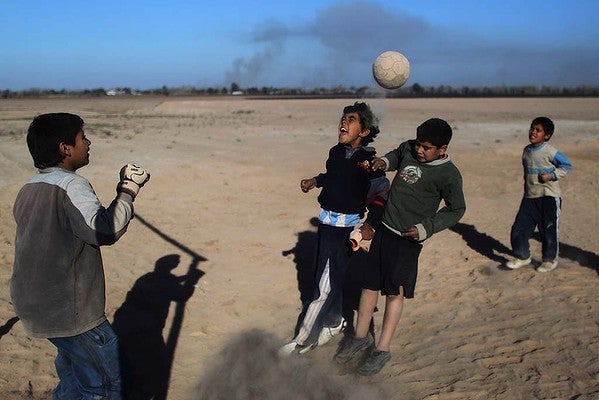 Miguel Tovar was a freelancer working on assignment for AP in Argentina, covering the Copa America soccer tournament, and he submitted a series of photos of children playing the game in a dusty field — and in one of those images, he used Photoshop to clone a dust cloud over his own shadow. This clumsy editing attempt has caused the AP to come down on extremely harshly. AP Director of Photography Santiago Lyon sent out a memo on the subject, and the organisation has completely blacklisted Tovar, and removed all of his images from their service:

It was eagle-eyed photo editor that noticed that the photograph above had an incredibly suspicious dust cloud in the lower-center of the image, covering the photographers shadow. While there’s no evidence that other images were edited, but it was enough for the AP to kill most of the set. You can still see the entire set online in places where it hasn’t been taken down yet, but we haven’t found the original anywhere.

The AP has a very strict code about what editing is allowed within their images, and their photographers are limited to:

Anything beyond this is not allowed. While Tovar’s move was obviously in violation of these rules, and a hamfisted edit, they didn’t change the substance of the content, which is prompting some debate about if this ruling is too strict, appropriate, or even not strict enough. While most photographers agree with the ruling, if only because it is critical that AP retain their unbiased point-of-view, I’m reminded of the Pulitzer prize winning shot of the Kent State shootings, which had an awkwardly placed post airbrushed out by an editor.