Yesterday, the New York Times and Der Spiegel posted a mystery gallery of WWII photos from an unknown photographer — and their readers found the source in just a few hours. 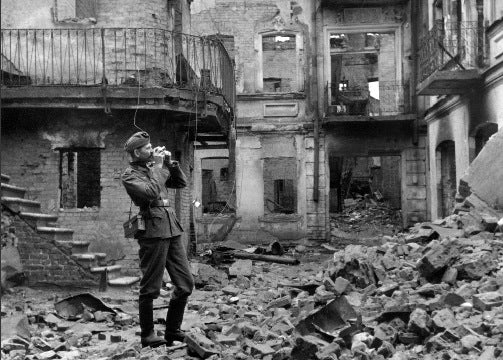 It was just yesterday that the New York Times and Der Spiegel made a combined effort to track down the origins of an intriguing photo album from WWII. This album was in the hands of a private American collector, who was attempting to sell it in order to pay for heart surgery, but he had no idea about its origins. The photos show a photographer with unprecedented access, ranging from propaganda pieces to images of war-torn buildings, motorcycle training and self-portraits, images of Hitler himself, and Soviet POWs.

The album seems to document movements through the Eastern Front, including the photographers own injury and convalescence. Turning to their readers, the NYT and Der Spiegel asked for anyone who might have any information, and within hours they had an answer. Contacted by a German historian, they found out that the photographer was Franz Krieger, an Austrian who lived until 1993, and worked as a photojournalist in Salzburg. He was a Nazi party member and one time part of the Schutzstaffel, before quitting to join the propaganda wing of the Wehrmacht, the Propagandakompanie.

The photographs are a fascinating and disturbing look at war journalism and propaganda. The contrast between the meeting leaders and the squalor of the ghetto, and then a series of picturesque snapshots. It’s also a testament to the power of crowdsourcing, and the fact that there existed an expert able to identify this information a mere few hours after the story was published.