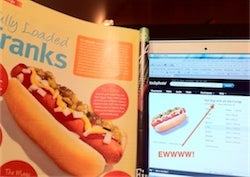 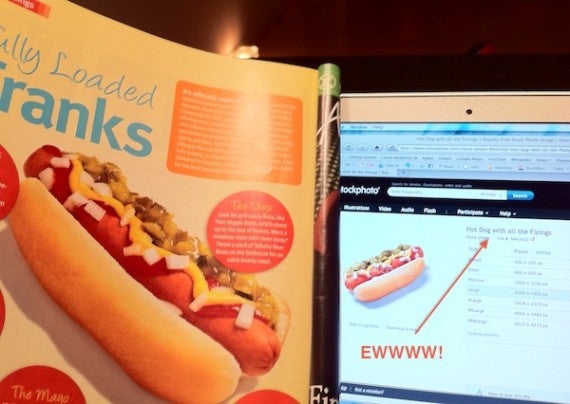 VegNews is a major online and print publication in the vegan world, but eagle-eyed readers recently caught them using stock photographs of non-vegan food, claiming they were animal-free images. The stock photos were noticed by the website QuarryGirl, who uploaded comparison pics of images from the website and magazine and their iStockPhoto counterparts.

The story blew up on Friday with VegNews’ awkward response in which they put the blame squarely on the time and money constraints of a small independent magazine, as well as the industry standard of using stock photography:

For the vegan audience of VegNews, this is nothing short of an affront. Vegans believe that no animal products should be used, and many of their number feel betrayed by the magazine. Let’s face it, the description of using stock photos as a last resort doesn’t really gel with the at least half-dozen examples that the original complaint spotted — including photoshopping out of bones in barbecue ribs to make them seem more appropriate. VegNews didn’t help matters by deleting the comments and banning many of those who raised the issue.

VegNews is hardly the first company to put objects considered unpalatable into their food photos. Commercial food photography is notorious for swapping out ingredients in order to make dishes more appealing. These range from the fairly minor (like hand placing sesame seeds, or microwaving damp cotton balls to make steam) to the distasteful (shortening or mashed potatoes for ice cream), to the famously offensive (Elmer’s glue in the place of milk or shoe polish to brown raw meat).

Many of VegNews’ readers obviously feel like their trust has been betrayed over what’s a very important issue to them, outside commenters have been quick to brand this as an example of vegan overzealousness. What do our readers think? Horrible breach of trust? Or nothing out of the ordinary for food photography?