The team behind the GoPano Micro found more people interested in their iPhone pano lens than they expected. 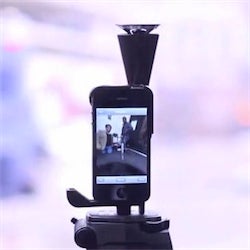 The team at EyeSee360 has been making panoramic lenses and software for years, but it wasn’t until the success of the Glif iPhone tripod mount that they thought to crowdsource the funding of their newest device: a lens that will allow iPhones to record video in all 360° at once.

Their original goal was just $20,000, which they blew past in less than a week — and that was before the tech blogs got wind of it. EyeSee360’s technical lead Michael Rondinelli said “we achieved our goal in only 6 days. When the tech blogs picked us up on the 5th, we raised another $21,000 just that day!”

Currently sitting on just over $95,000 in funding, the project still has a month left where you can chip in to help out — and $50 of funding will get you a pre-order of the new lens, which is expected to retail for $80 when complete. Rondinelli was blown away by the response, saying:

With so many more backers than originally planned, the team is working harder than ever to meet the extra demand.

Between devices like this, the Glif, and the Cosmonaut, Kickstarter is rapidly becoming the place to get funding for small tech projects, especially those designed to run on the iPhone.