Michael Cunningham’s images prove to be extremely valuable to researchers. 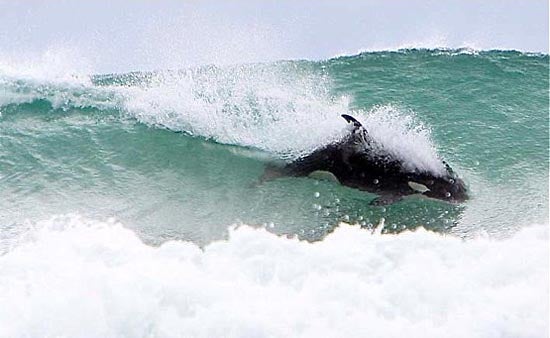 Who knew that Shamu was such a choice surfer?

Photographer Michael Cunningham was enjoying a leisurely swim off the coast of New Zealand when he witnessed a strange and intriguing phenomenon. It appeared that several Orca or ‘Killer Whales” were riding the waves in to the shoreline as if they were trying to show up the local surfers who came out to ride the swell.

Perplexed by the situation, Michael jumped out of the water, dried off, grabbed a camera and started snapping photos.

It’s a good thing he did because according to marine biologists, his images are some of the only ones in existence that show the New Zealand surfing Orcas. In fact, nowhere else in the world has this strange and somewhat humorous phenomenon been seen.

Thanks to his quick reaction and an even quicker eye, Cunningham’s images will help researchers in their quest to further understand the nature of these giant sea creatures.