d expect. The red tourist dots are heavily centralized around popular areas like Time Square, Central Park, the South Street Sea Port and even the Statue of Liberty. 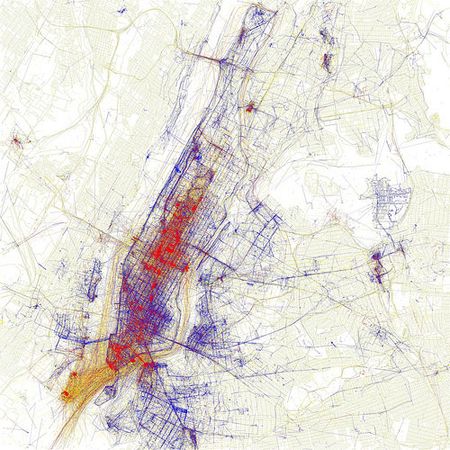 The map above shows New York City. The red dots represent photos taken and uploaded to Flickr by tourists. The blue represent shots grabbed by locals and the yellow might be from either camp. It’s a project put together by Flickr user, Eric Fisher, who was curious about where people were taking photographs. The New York results are almost exactly as you’d expect. The red tourist dots are heavily centralized around popular areas like Time Square, Central Park, the South Street Sea Port and even the Statue of Liberty. The only real red patches outside of Manhattan happen around the baseball stadiums. He has done a ton of cities, some of which are very interesting and many of which appeared on American Photo‘s list of**** the 25 Best Places in the World to Photograph.

Not only are they cool to look at, but they might offer some incredibly valuable insight for people thinking about traveling to certain destinations. Sure, it’s fun to go to a place and try to grab the iconic images, but everyone comes home with a camera full of shots from the red spots. Even if you don’t live in any of the cities listed, it’s still fun to go through and try and guess why spots are so popular.