Not long ago there was a rumor going around the Internet that Applet a camera to be found. 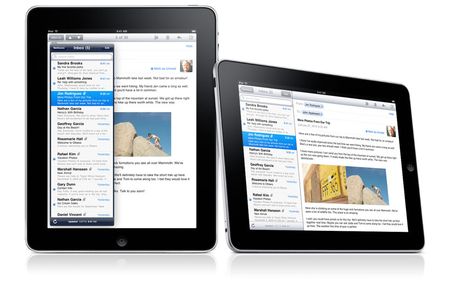 Not long ago there was a rumor going around the Internet that Apple’s new tablet computer, which we all know now as the iPad, would have two indpendent cameras. One would be on the front like a webcam for video conferencing and the other on the back for taking photos like with the iPhone. Now the iPad is official, though and there isn’t a camera to be found. It seems almost shocking, especially when you consider that Apple found a way to cram a VGA video shooter into their miniscule iPod Nano.

Flipping through the slides of Steve’s presentation makes the lack of any photographic firepower even more disappointing. The actual photo browsing interface looks incredibly slick, taking the iPhone OS utility and beefing it up. The big 9.7-inch capactive screen seems like it would be excellent for viewing photos, even if you will have to deal with the glare from the shiny glass. It has the ability to put together slideshows with music (just like in the real iPhoto) and show pictures pinned to Google Maps for viewing geo-tagged images.