It seems Samsung has the camera bug lately, because they celebrated Martin Luther King day by introducing a handful of... 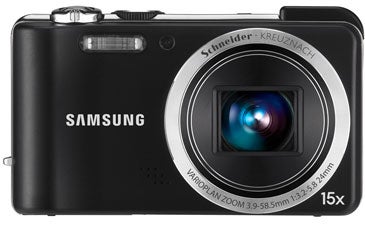 It seems Samsung has the camera bug lately, because they celebrated Martin Luther King day by introducing a handful of new pocket-friendly cams. Perhaps the most interesting announcement in the lot are the 15x-zooming HZ30W and HZ35W. Both come toting 12-megapixel sensors, dual image stablization (optical and digital) and the ability to shoot 720p video at 30 fps. They have also upgraded their Smart Auto technique, which picks the proper scene mode after analysing your composition, so it now works while in video mode. The step up from the HZ30W to the HZ35W gets you GPS and an upgraded AMOLED screen, similar to the one in their recently-announced NX10 interchangeable-lens camera.

The TL105 and TL110 are part of Samsung’s ultra-slim line, checking in at just .65-inches thick. Both are equipped with the same 2.7-inch LCD screen, HD video mode (same as the HZ cams) and the usual suite of creative modes. The differences here are more pronounced than they are in the HZ series, with the TL110 gaining two extra megapixels (14.2 vs. 12.2) and 5x optical zoom compared to the 4x of the TL105. The TL110 also gets optical image stablization in addition to the digital IS found in the TL105.

The last cam in the bunch, the SL630 is a more granular update to their popular, mainstream SL series. It brings with it a 12.2 megapixel sensor and 5x optical zoom, as well as the dual IS you’re getting sick of reading about in this post. You’ll lose the ability to shoot HD video (it maxes out at 640 x 480) but we expect that will be made up for when the price tag gets stuck on the box.

Hit the jump for images galore.