Casio has had a fair bit of success with their rugged watches (G-Shock) and cell phones (Gll find a 12.1-megapixel sensor and a 2.5-inch LCD display, as well as a 3x (38-114mm equivalent) zoom lens. 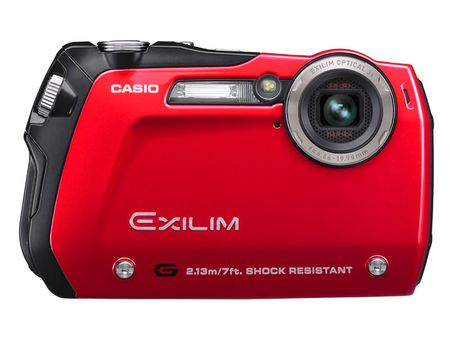 Casio has had a fair bit of success with their rugged watches (G-Shock) and cell phones (G’zOne), so it only makes sense that they would take a whack at making a tough camera. This burly compact has a stainless steel frame and a pressure sealed case, which make it resistant to shock, dirt, humidity, snow, extreme temperature and water. But, despite its ability to stand up to punishment, it still manages to keep a slim figure, checking in at just .78-inches thick. Inside you’ll find a 12.1-megapixel sensor and a 2.5-inch LCD display, as well as a 3x (38-114mm equivalent) zoom lens.

One thing extreme athletes are sure to appreciate is the Advanced Dynamic Photo Function. The camera captures a series of images in which the subject is moving. The subject is then cut from each frame and placed against the static background from all of the images, creating a sequence much like the ones you’ll see in the pages of just about any skateboarding, snowboarding or biking magazine on the shelves.

With its slim form factor and $299 price point, it seems like the EX-G1 has potential to be a real contender in this increasingly crowded market. Aside from Canon’s blimp-like D10, it’s really the only camera in the segment to try something drastically different aesthetically. Casio claims its futuristic design makes it more ergonomic on top of making look like something that was birthed by a Lamborgini. Check out all of the tech specs and more pictures after the break.