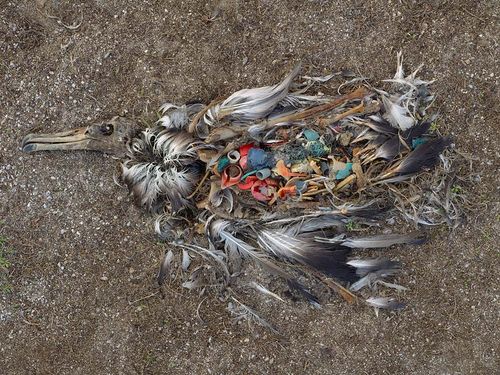 This series of rather disturbing images was taken on Midway Atoll, which as the artist puts it, is a “a tiny stretch of sand and coral near the middle of the North Pacific.” Each image depicts the remains of an albatross chick that was killed by their own mothers who mistook trash floating in the ocean for food and fed it to their young. It’s a problem that affects tens of thousands of the birds a year.

When documenting it, Jordan left his subjects untouched and unmoved. As it says on his site, “not a single piece of plastic in any of these photographs was moved, placed, manipulated, arranged, or altered in any way.” Keeping that in mind, it’s morbidly impressive just how much plastic some of these little birds were able to injest before they died from poisoning or choking. Some of the birds remain relatively identifiable, but perhaps the most powerful images in the series are those where the bird has decayed so badly that the feathers and bone mix in with the plastic, making it difficult to determine where the remains end and the trash begins.

The series includes 25 images, which you can view on the artist’s site. The subject matter is certainly no departure for Jordan. He has often used his creative vision to point out the flaws in what he calls, “American Mass Consumption.” He’s currently showing his series, “Message in a Bottle” at The Mariners’ Museum, Newport News, VA until December 30th. There is also a great blog he did about the project on his site with video and recounts of his experiences.