On June 5, 1989, the Jeff Widener was one of five photographers to capture the moment from a nearby hotel. 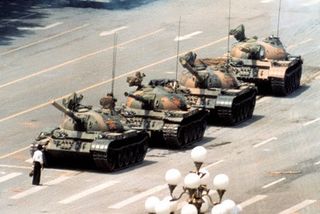 On June 5, 1989, the “tank man,” a lone student carrying a jacket and a shopping bag, stepped in front of a row of battle tanks and raised his arm, instantly becoming a symbol of the 1989 Tiananmen Square protests. He also became part of one of the most famous photos of the 20th century.

Jeff Widener was one of five photographers to capture the moment from a nearby hotel. His photo, smuggled out of China in a college student’s underwear, became the most widely printed picture of the event.

Left with no choice but to use Fuji 100 ASA film after having gone through all of his 800 ASA film, Widener trained his small Nikon FE2 on the tanks. When the man ran in front of them, WIdener’s first thought was that his composition would be ruined. His second thought was that his Nikon 400mm 5.6 ED IF lens wouldn’t be able to capture a good shot. He risked losing the shot to grab his TC-301 teleconverter.

To read Widener’s full account as well as those of the other photographers who captured the moment, check out the New York Times’ Lens blog.  __

Photo by Jeff Widener for the Associated Press.