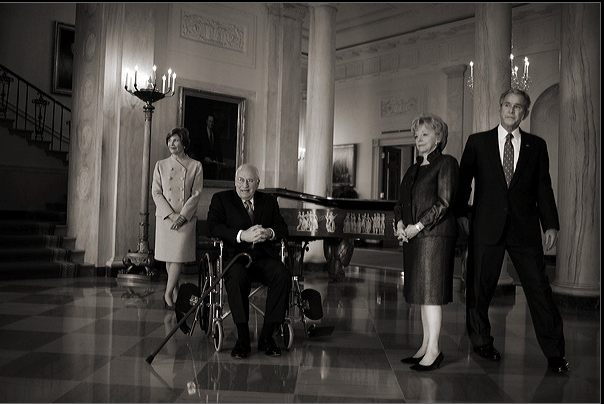 The White House News Photographers Association has released the names of the winners of its 2009 Eyes of History photo contest. Washington Post photographer Andrea Bruce was named the Photographer of the Year, and Charles Ommanney of Getty Images/Newsweek won the Best Political Photo award.
This is the fourth time Bruce, who learned of her win while on assignment in Iraq, has won the Photographer of the Year award. Her previous awards came in 2003, 2005, and 2006.
Ommanney’s award came for his photo of President-Elect Barack Obama inside the Capital, moments before he walked onto the viewing stand to be sworn in as Commander in Chief (above). Contrast that image with another winning photo made by Ommanney that day showing President George W. Bush and Vice President Dick Cheney and their wives waiting for the arrival of the Obamas at the White House (below). What can we learn from these two pictures? (For a complete list of the winners, go here.)–David Schonauer