Want great images of Africa? Here’s a new way to get them.By John OwensEditor in ChiefSome of the most wonderful places to photograph are the most difficult to get to. At least that used to be the case with Ethiopia. 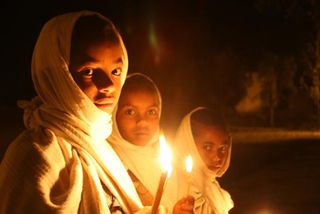 Want great images of Africa? Here’s a new way to get them.

By John Owens
Editor in Chief

Some of the most wonderful places to photograph are the most difficult to get to. At least that used to be the case with Ethiopia. This East African country, with its thundering Blue Nile Falls, beautifully preserved 12-century churches, and many people untouched by the modern world, truly falls into the category of “undiscovered.”

Part of the reason is that for many years it was difficult to find a travel company that could take you there on your terms without feeling—and spending—like you were on a Victorian-era expedition.
But the country’s Boeing-jet-flying flag carrier has made customized trips easy to set up and easy to afford with its new Ethiopian Airlines Journeys.

Say you want to spend a week exploring the northern half of the country, starting in the center at the capital of Addis Ababa. As little as $2,000 per person can get you round-trip airfare from Washington, D.C.’s Dulles airport, accommodations, and a guided sweep through the best of the country photo ops.
From the capital to the Blue Nile Falls to Gondar (with its compound of royal castles), to Lalibela (with its 12 churches hewn out of red stone and preserved as an absolute marvel of both engineering and piety), you will get images that are as uncommon as the place itself.