If you fly on Southwest Airlines, perhaps youd get letters about the picture of Rafaeli. 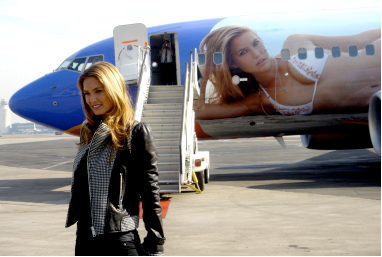 If you fly on Southwest Airlines, perhaps you’ve seen the planes with the picture of 2009 Sports Illustrusted Swimsuit Issue cover girl Bar Rafaeli painted on the side. Even if you are earthbound, you may have read reports about the latest aggressive marketing project. The airline has a lighter-than-air approach to entertaining it customers, who, buy and large, seem  to enjoy the effort. However, I could have warned Southest executives that they’d get letters about the picture of Rafaeli. This report doesn’t say how many letters and emails the airline received, but it quotes a Southwest spokesman who said about a quarter of the responses were negative. That includes the letter from one offended person who said his plane looked like “flying porn.”  Another person called the plane “tacky.”
The story is an interesting starting point for a discussion. I don’t think the picture on the Southwest plane is pornographic. I understand that some people might. You are invited to state your opinion here.
The discussion is important, I think, because it helps us all understand what kinds of public imagery most people consider acceptable. It’s easy to fire off a letter accusing someone of promoting pornography. (As the editor of a photo magazine,I’ve gotten plenty of those notes. They all seem to begin, “If I’d wanted a porn magazine, I’d have bought Playboy, not American Photo.”) That probably why I’m sensitive when people play the porno card.
My point here is that there a big space between “tacky” and “pornographic.” Is the SI image tacky? Yeah, I think so, in the context of this use on an airplane. For me, basically any ad painted on the side of a commercial airplane would be fairly tacky. (Would it be any better if Southwest had painted an ad for Imodium or Cialis on its plane?) Hyperbole doesn’t help the discussion.–David Schonauer