First, the Poster as Art. Now the Original Photo Is Too 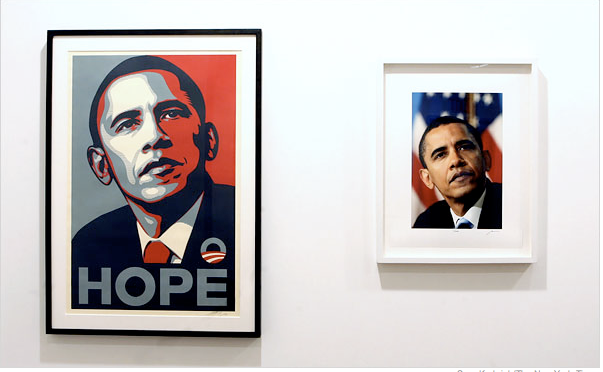 I’ve been following the controversy between the Associated Press and artist Shepard Fairey, who created the now-icon “Hope” poster of Barack Obama. AP says Fairey owes it some money, because the poster was based on a photo made by an agency freelancer, Mannie Garcia. Today’s New York Times tells us that Garcia’s original picture is also becoming a collector’s item. It is being sold at what the newspaper calls “a Chelsea gallery” in a limited edition of 200. Asking price: $1,200 for a print. The Museum of Fine Arts in Houston has bought the poster and a Garcia print. Among the things I learned in the Times piece was that Garcia was also responsible for that notorious image of President George W. Bush looking out the window of Air Force One on a flyover of New Orleans after Hurricane Katrina. Garcia himself notes in the piece that he never “made the connection” between the poster and his own image–which raises some questions about whether there were in fact copyrightable elements in the original.The photo above is by Sara Krulwich for the New York Times.–David Schonauer