Associated Press vs Shepard Fairey, Round 3

Or is it Round 4? It don poster on a photo made by AP photographer Mannie Garcia. 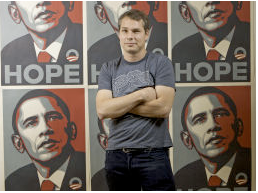 Or is it Round 4? It don’t know anymore. As you will recall, the Associated Press came after guerilla artist Shepard Fairey (above), who based his now-famous Barack Obama “Hope” poster on a photo made by AP photographer Mannie Garcia. AP claimed there was copyright infringement and wanted to share some of the estimated $400,000 that Fairey has made from the poster.
Fairey and his lawyers figured that the best defense is a good offense, so they sued AP, hoping for judgment from the courts that he not infringe on any copyright and in any case is protected by the Fair Use Doctrine, which allows the use of copyrighted material for specific reasons such as commentary or criticism.
Now AP has countersued Fairey, saying his use of copyrighted material is a threat to journalism.
The photographer who made the picture has had his own beef with AP.
I still can’t see way that AP can come out on top of this. As I have noted previously, American Photo contacted an expert in the coyright field, who wondered whether there were any genuine copyrightable elements in the original photograph. As she noted, someone’s expression in a photo is not copyrightable. Furthermore, Fairey did significantly alter the original photo, and his usage would seem to fall under the idea of fair use.
But I’m not a lawyer. Maybe a settlement is in order.–David Schonauer