Heres Lipstick Building, made his pictures, turned them in, then forgot about the assignment. 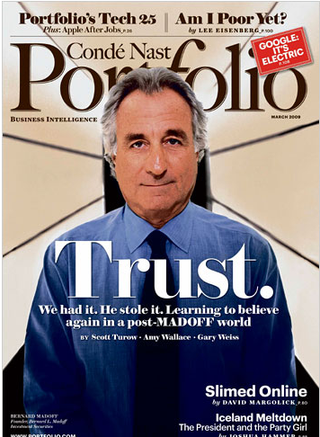 Here’s a story from our “You Never Know…” file: Ten years ago photographer Jonathan Saunders got an assignment from Fortune magazine to do some portraits of an investor the magazine was covering. It seems the investor had a unique approach to his work that was paying off pretty well.
His name was Bernard Madoff.
Saunders went to Madoff’s headquarters in Manhattan’s Lipstick Building, made his pictures, turned them in, then forgot about the assignment. Cut to last December, when the Wall Street Journal called him in asking for his Madoff photos.
They were  also doing a story on Madoff’s unique approach to investing, which, as if turned out, wasn’t paying off as well  as it seemed 10 years  earlier.
In a story in today’s New York Times, Saunders recalls the moment: “I was like, that’s kind of weird, that’s a 10-year-old portrait I did of a guy I don’t remember, and they were very eager to pay my minimum and get it in the paper,” Mr. Saunders said. “Then, within five or six hours, there was an avalanche of Google news alerts about it, and I was like, oh. I’d better make better scans.”
Since then, Saundes’s pictures of Madoff have appeared all over the world, including the cover of Portfolio magazine (above). So while Madoff wiped out a lot of people with his ponzi scheme, he managed to make one photographer a little wealthier.–David Schonauer