Annie Leibovitz and the Pawnshop of the Art Elite

The photo world has been buzzing for months about the possibility that Annie Leibovitz might be broke. A front-page article in today’s New York Times seems to confirm that she is indeed in a financial bind. Salkin reports that Leibovitz got a loan of $5 million dollars from the company last fall. 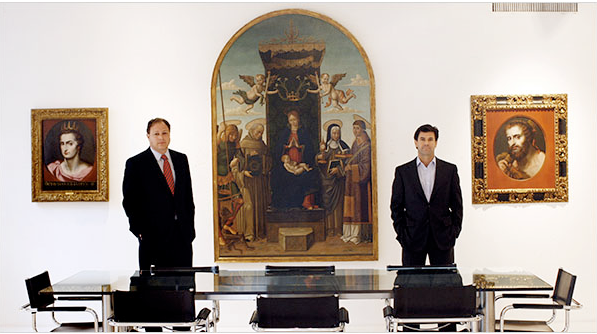 The photo world has been buzzing for months about the possibility that Annie Leibovitz might be broke. A front-page article in today’s New York Times seems to confirm that she is indeed in a financial bind.
According to the article, by Allen Salkin, Leibovitz secured two loans last year from a company calls Art Capital Group, which is essentially a pawn shop for the art elite.
Salkin reports that Leibovitz got a loan of $5 million dollars from the company last fall. In December, she borrowed $10 million more.
If you’ve ever dealt with pawnshops, you know that you have to give them something to hold as collateral against the money they loan you. Salkin reports that Leibovitz put up houses she owns in Greenwich Village and a country home in Rheinbeck, New York.
The collateral also included all “copyrights…photographic negatives…contract rights” existing or to be created in the future, reports Salkin.
There have been other signs that Leibovitz was in trouble. A stylist and a lighting company she had hired for shoots have sued her for more than $700,000 in fees they say they are owed.
Leibovitz isn’t the only big name in art to take loans from the company, which is headquartered in the old Sotheby’s building on Madison Avenue in Manhattan. The article notes that Julian Schnabel turned to Art Capital for an $8 million loan to finance the construction of Palasso Chupi, “an ornate apartment project on West 11th Street.” (He used only the real estate itself as collateral, but later took a loan from a bank to pay back Art Capital, and in that case he did put up his personal art collection as collateral.
Art collectors like Veronica Hearst have also turned to the high-end pawnshop. She put up two Reubens paintings in an effort to hold onto a 52-room mansion in Florida. She ended up losing the mansion to foreclosure, and the Reubens now hang in the Art Capital Group offices (above).
There was lots of high-flying when the economy was awash with credit and commerce. Things are different now. As Warren Buffet once said, you don’t know who’s swimming naked until the tide goes out.—David Schonauer

Features
news
State Of The Art