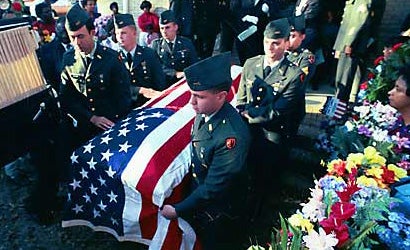 The funeral of a soldier in Bibb County, Alabama. Photo By Mark Lent
SHARE

Picture yourself in this situation:

It’s the middle of summer. The air is hot and the humidity hangs on your shoulders like dead weight. Suddenly, the thick air splits with the crackle of a police radio:

Someone has just been robbed and shot at the convenience store just down the road. You get into your car and, as fast as you can, get to the scene-where chaos abounds. The robbery happened near a shift change, and the replacement clerk is sobbing hysterically near the now-dead body. Police officers spot you and sternly ask you to move back away from the crime scene-you oblige by moving into the road and shoot the scene with a 300mm lens rather than the 85mm you had been using.

This is one of the nine assignments (because spot news is ALWAYS an assignment…) that you end up shooting today. You came into work at 9 a.m., and at 10:30 p.m. you remember that you haven’t eaten today, so you go to the nearest fast food place while your CF cards are loading onto your hard drive. You wolf down the burger and fries and something that the fast food manager told you is a strawberry shake without giving the taste much thought. It’s now midnight and you’re leaving work after a grueling 15-hour day.

Even at the end of such a long day, you consider the images that you turned into the desk for the next day and think to yourself that it’s worth the extra effort. The next day, you’re at it again. Today, though, you only have six assignments and heard about this children’s festival going on in the next town’s school, so you decide to try to make a feature photo out of it. But since it’s a new day, you have a whole new series of spot news events to photograph. Car wrecks, murders, bank robberies, you see them all. Even with the light load, you still manage to have an 11-hour day.

It’s now 8 p.m. and you suddenly remember that you are married. If you hurry home, you just might get to talk to your spouse for 30 minutes before they turn in for the night. Your newborn child is already asleep and you peek into the infant’s room for a glimpse.

The next day is the day of the week that you live for-PAYDAY! You get into work and there, nestled among the 10 assignments on your desk, is that little white envelope. You open it and see a check for $317.00 for the week. In the column that’s attached to your check you look at the hours posted for the week and it reads “40.”

This gets you to thinking that if it weren’t for that freelance work you’ve been doing, it would be tough to make ends meet. You think about the clients that you’ve worked for over the years, and the list is getting longer and longer. It should be, too. You’re a good photographer and give your very best work each and every time that you pick up your camera.

So, transforming yourself back to the here and now, you’re probably wondering what this has to do with my writing?

Easy. I lived this. At one time, I worked three jobs simply to pay for my school, food, camera equipment and the roof over my head. It’s not fun, and you have to sit and wonder to yourself if it’s really worth all of the effort that you put into it. I came to the conclusion, like many other full-time photographers, that it wasn’t.

I got married on August 20, 1994. My wife Kristi and I had a really nice honeymoon. We got back to our home on a Monday and I went back to work on Tuesday. From Tuesday morning until 10 p.m. Saturday night I didn’t get to see my wife. That Saturday, we had planned to have a nice, quiet evening together, but I was called out to a murder. She came along with me, just so we could spend some time together. I remember telling one of the TV videographers that I knew that it was ridiculous for me to have to take my wife to a murder scene just to spend “quality time.” So, we got home and talked about it at length and decided that I should quit my job. The following Monday, which was Labor Day, I turned in my notice.

|| |—| | Photo Gallery****Comment on this****More Blogs & Columns| I freelanced for two years and in that time, I learned more about thinking of my photography as a business than in all the years that I had worked for newspapers previously. It’s a tough world out there-especially when you don’t know when your next paycheck will be.

I started thinking about this because on the NPPA-L list (the home for discussions by the National Press Photographers Association), there was some grumbling about the contract that Associated Press has presented to the freelancers who shoot for the giant. I tried today to reach someone at the AP in New York to give this a balanced viewpoint and allow them to share their side of the story. Unfortunately, I didn’t get a response from the AP, so I am going to play both devil’s advocate and the shooters’ side of this issue.

First, I need to say that I have an immense respect for the AP and its shooters. They are, without a doubt, some of the best photojournalists in the world-bar none. I have to admit too that I’m a little jealous of their job. As far as photojournalism goes, it is the cream of the crop. Good pay (we’re talking about staff photographers here, not freelancers who shoot on a job-to-job basis), excellent state-of-the-art equipment, good assignments, travel. I have to admit that if I was ever offered the job it would be hard to turn down…

Now, one thing that needs to be made clear from the beginning is that the AP is a (non-profit) business. And as such, should be able to market their products, namely photos and video for newspapers and TV stations, in a business-like manner and not lose money in the process. The AP should also be able to protect itself from lawsuits and other legal maneuvering. The AP also has the right to maintain a certain control over the images that freelance photographers shoot while being credentialed for the AP. In other words, it isn’t fair to the AP to credential someone for an event and then have that person turn around and sell the “culls” to a competitor (such as UPI, Reuters or AFP). I think that these are pretty common-sense issues, and I doubt that you’d hear much grumbling about these points from photographers.

The shooters’ side of the issue really revolves around two main issues. First is the rights that the photographer signs over to the AP. In their contract, the photographer gives the AP virtually all rights to all images that they shoot. It used to be, back in the good old days, that you’d get the negatives back eventually. Not anymore. The rights issue is an important one first, because it sets a precedent for smaller organizations (namely, newspapers) to follow suit. This would mean that the photographer won’t even be able to make a print to show in his/her portfolio. Next, if the AP were to resell the print several hundred times, the photographer is out that part of the money. Resales, especially in the electronic age, are a pure moneymaker for the AP. The images are already shot, and in the 30 seconds that it takes to transmit, the AP can command $200 or up to thousands of dollars for a single-use image. And since many photographers live from paycheck to paycheck, this hurts.

|| |—| | Photo Gallery****Comment on this****More Blogs & Columns| There are very few professions that require a type of investment in equipment that the professional photographer requires. A $25,000 investment is not that uncommon, and when compounded by the cost of a college education, becomes enormous. Under these circumstances the second issue in this problem is that of money. I don’t think that it’s unfair to expect that the AP give at least a part of the proceeds from resales to the photographer. In the current contract, the AP keeps all proceeds from reprint sales.

Some have suggested a 50-50 split. I tend to think that a percentage would be more equitable. That way, the photographers would get a cut of the profits while the AP could expect a certain profit level from each sale, and everyone would be happy. And admittedly, the AP should get the lion’s share of the profits, because of overhead and expenses required to market and archive the image while employing personnel to actually do the work of selling (and reselling) the image, but I don’t think that a 25% cut for the photographer, as a minimum, is unreasonable. To me, it shows good faith on both parts and an arrangement that is livable all the way around. To do otherwise to the photographer is, in my opinion, fleecing them.

I wrote on the NPPA-L that I thought that this really wasn’t an issue about legal maneuvering but rather being fair to the little guy-the freelancer who hustles every day to make a living. The guy who drives a car with 140,000 miles and no air conditioning because he can’t afford a newer car. The guy who makes $1,200 a month at his newspaper while paying off a substantial college loan and equipment costs. These are the people who shoot the Turnip Pageant and “Pet of the Week” and I, for one, don’t think that not paying for their work is an honorable thing to do. And this isn’t just an issue with the AP. It’s magazines, newspapers and stock photography houses. And most recently, companies like istockphoto.com, who invite the masses to contribute their images, cheapening the profession even more. How is anyone supposed to make any profit selling his or her images in “The Dollar Bin”?

So, to all of you “little guys” out there, this is dedicated to you and your work. Keep it up and remember that you have a valuable commodity-keep that in mind when you talk to anyone about signing over all of your rights to an image. What you do is valuable, and you should be compensated fairly for it.