Exposing the Horrors of Kids Jailed for Petty Crimes. 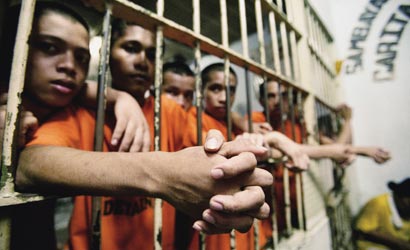 At age 28, Hazel Thompson burst on the international photojournalism scene last September, when her pictures of children in overcrowded jail cells in the Philippines were shown at the Visa Pour l’Image festival in Perpignan, France. While Thompson has worked for newspapers and shot for The Sunday Times Magazine and The Observer Magazine, she has devoted herself to working closely with non-governmental organizations such as the Romanian Angel Appeal and Jubilee Action, a London-based human-rights advocacy group. It was the founder of Jubilee Action, Danny Smith, who called in Thompson to work on the Kids in Prison photo series. Even though she is young, Thompson is, as Smith writes here, a model of the concerned photojournalist, one who takes on dangerous work with the clear intent of making a difference in the world.

Hazel doesn’t walk, she runs. Her energy matches her enthusiasm as she chases ideas. Her zest for life ignites brainstorming meetings, yet she has a canny knack for tempering wild ideas with logic and can handle complex situations deftly.

At times, I have wondered if her exuberant personality would be best realized within the theater rather than in a solitary profession such as photography. But she has measured strengths and weaknesses within herself that, I believe, are the keys to progress as a photographer.

Hazel’s work in the Philippines began when she heard about the situation there from Father Shay Cullen, a pioneering children’s rights advocate. He told us about kids being imprisoned for petty crimes and held in truly shocking conditions: in cramped, overcrowded cells; detained with adults for indefinite periods of time; without legal assistance.

It seemed an extraordinary contradiction that in this age of unparalleled technological breakthroughs and public awareness of social issues, children could be imprisoned, caught in an international blind spot. But it is true, not only in the Philippines but in other countries as well. Even the world’s leading experts on such matters don’t know the exact numbers of children being held in prisons around the world.

Together with Father Shay’s Preda Foundation, we decided to launch a campaign to raise awareness and seek changes in the law. Father Shay told us he could take us into Filipino jails, and I knew that the best way to send a message to the world would be to get the story into the media.

I also knew how difficult it could get: dangerous for whomever we sent to investigate, dangerous for Father Shay and his organization if the story was exploited by the media. It was essential that this great opportunity be maximized and its potential used to the greatest impact.

I had already worked closely with Hazel on a similar campaign when we went inside Bombay’s brothels. Because we had reached this point of trust, I didn’t hesitate to pick up the phone and dial her number. She couldn’t fathom compromising ideals just to get a story. Her ability to stay in character gives her work creative power and authenticity, and ultimately it is this attribute that enhances her character. After all, any of us could find ourselves in unprecedented circumstances and press a button on a camera, but Hazel sees herself as a witness. She carries on the tradition of that old school of players who recognize that their role is to reflect and illuminate the world they see around them.

She guards her moral code, faith, and creative focus with a zeal I have grown to admire. It isn’t just that she wants to reveal the truth she has witnessed; she wants that moment of revelation to make a difference. The story becomes important in the context of her worldview.

Our campaign captured significant coverage when ITV News and CNN picked up the issue, and we organized hearings in the United States Congress. The campaign to help “kids behind bars” isn’t over, but we have already seen important progress, with a new juvenile justice bill introduced in the Philippines. As a result, 70 percent of criminal cases against children will be dismissed completely. Children will no longer be jailed, and kids under 15 years will be sent to youth homes.