Images from Science 2 at Rochester Institute of Technology

This wasnre seeing is an actual mushroom cloud. 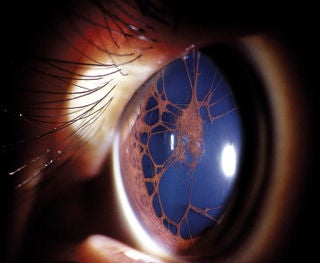 The Pop Photo Flash recently alerted you to a much anticipated exhibit of technical and scientific photography at the Rochester Institute of Technology in Rochester, NY.  Upstate New Yorker Robert Grossman (Senior Editor Debbie Grossman’s father) offers these thoughts on the show…

On the silver screen, sequels often pale in comparison to the original blockbusters.   But “Images From Science 2,” the sequel to a photo exhibition first mounted at the Rochester Institute of Technology (RIT) in 2002, is clearly a winner.  A juried show, it presented the best 63 photos from 315 submissions coming from a variety of scientific disciplines.
The exhibit, which hung from October 11-25, 2008, was expertly installed and lit in the SPAS gallery on the third floor of the Frank E. Gannett Building on RIT’s Rochester, NY, campus.

Each of the sciences had a wall highlighting three to five images from their respective fields. In addition to the usual suspects of weather and astronomy photos, there were exciting shots (pun intended) of blast waves emanating from rifles and rockets. For fans of photomicrographs, there were water fleas and rat fetuses to spare.
Entering the gallery space, the first image that greets you is “6 Month Old Fetus Revealing Lanugo” by Lennart Nilsson.   This striking photo is remarkable for its clarity. You see the extraordinary detail on the face of the fetus and especially the lines on the face that resemble nothing more than the whorls, arches, and loops of a fingerprint.
My eye was next drawn to “The Infrared Helix Nebula-2007” by Robert L. Hurt.  Taken from NASA’s Spitzer Space Telescope, this infrared image clearly resembles a giant eye in the sky.  A field of green surrounds a deep red “iris,” in which a bright red “pupil” resides center frame.  Color jumps off the print. Whether this image is actually the eye of God, I leave others to decide.

This wasn’t the only “eye” on display.  Among four fabulous views, I especially liked the Chris J. Barry slit lamp photograph, “Iris Anomaly-2007.”  The deep blue of the iris, with the flash reflected in the lower right, looks like a doppelganger for the planet Earth.  In reality, the eye’s brown anomalies will ultimately help produce glaucoma, but in this image, they appear like continents on a mini Earth.

Plant and animal life is also well represented here, especially at the macro and micro levels. Joe Ogrodnick’s submission, “Sclerotinia Sclerotiorum Ejection of Ascospores,” is a dramatic slice-of-life from the mushroom/fungus world.  The ejection of these microscopic spores forms a smoke cloud that appears almost identical to the iconic photographs of atom bomb blasts – no surprise, since what we’re seeing is an actual mushroom cloud.

An image of a computer chip magnified 35,000 times and entitled “Data Channels, 2007” by Hans U.Danzebrink and Anna-Maria Gleixner shows the hills and valleys of microscopic electronic circuitry.  Cleverly, the “valleys” are colored blue, evoking rivers (of knowledge and information) flowing from chip to processor.

Props to RIT for putting on a great show.  My only peeve was that RIT’s publicity folks didn’t get out the word so that more native Rochesterians could have found and enjoyed it.

The five photos described here were my personal favorites among the sixty three, but that in no way diminishes the power of the remaining images.  Like the original blockbuster, this sequel will travel nationally and internationally, with its first stop scheduled for the University of Dayton (OH) from February 23 through March 26, 2009.  If it opens near you, I highly recommend a visit.