Either way, the now-seen-globally videotape won't do much to help West's defense, or his image. (Unless, that is, you share his disgust with the paparazzi.) — Jack Crager 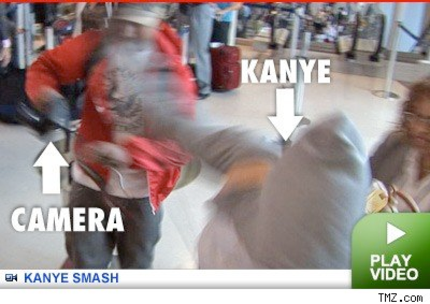 Somebody forgot to tell superstar rapper Kanye West that when you try to destroy a paparazzo’s gear, it’s best not to do it while being filmed.

West was booked on suspicion of felony vandalism following his skirmish with a photographer yesterday at Los Angeles International Airport, according to reports. However, it may be the entertainer’s bodyguard who’s really going to face the music, according to TMZ.com, which caught the fracas on video before it’s own cameraman became involved. Viewing the videotape, it seems that West’s bodyguard smashed a $1,400-plus Canon 40D DSLR — possibly a felony as it’s worth more than $400 — while Kayne threw down the photographer’s $100 light unit. “Here’s the irony,” TMZ opines, “the bodyguard could be processed for a felony, but not Kanye.”

Either way, the now-seen-globally videotape won’t do much to help West’s defense, or his image. (Unless, that is, you share his disgust with the paparazzi.) — Jack Crager