The media (old and new) is rushing to tell Americans who the real Sarah Palin is. I may be am admittedly a little cynical, but in truth I don’t believe it’s a job the American people particularly want done. Those who were appalled by the spirited attack of her acceptance speech know all they need to know about Sarah Barracuda. 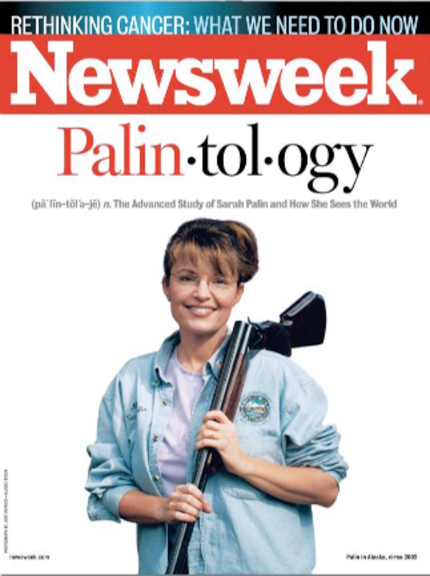 The media (old and new) is rushing to tell Americans who the real Sarah Palin is. I may be am admittedly a little cynical, but in truth I don’t believe it’s a job the American people particularly want done.
Those who thrilled to her last week at the Republican National Convention know what they want to know about the governor of Alaska and vice presidential candidate.
Those who were appalled by the spirited attack of her acceptance speech know all they need to know about Sarah Barracuda.
Palin has proven to be the most divisive political figure of the election. I have absolutely no idea who wins from that fact: She energizes both the Republican conservative wing, who were never that fond of John McCain, as well as Democrats who see her as George Bush with an up-do.
I guarantee that newspapers, magazines, and broadcast news organizations win from Palin’s unique story and colorful character. She is, as newspapermen used to say, “good copy.”
In this kind of environment, the role of political imagery becomes really interesting. Pictures don’t inform people with facts, but they do create an iconography that tells a story, and they do allow voters to gaze into a candidate’s eyes and judge them on an emotional level. This week’s newsweeklies are each a case in point:

Newsweek
Here is some iconography, for sure: Palin, workshirt, gun. (Can anyone tell us what kind of gun that is? It’s broken open like a shotgun, but I thought she shoots moose…is that what you use to hunt moose?)
I can hear the Palin-haters exhaling is disgust at the Newsweek shot, which is a visual amplification of the Palin mythology unleashed last week at the RNC. The brilliant cover line, “Palin*tol*ogy,” promises something more and suggests we will be given an unapologetic peek behind the myth. But the power here is the reinforced image of Palin as an unorthodox politician with blue-collar values.
There is also a case to be made that in casting Palin in this way, Newsweek is accurately pointing out that the 2008 election has become a one-issue contest. That issue is Sarah Palin and the psycho-cultural space she occupies. With Palin aboard the Republican ticket, the election is not about economy or war, but about red-state vs. blue-state values.

Time
Here is another approach to the Palin story, and a far more emotional one. If Newsweek presents the Palin myth, Time wants to show us Palin the person. We come in very close. Eye contact? Forget about it—this is soul contact.
Unlike Newsweek, the Time cover line does not promise to coldly dissect the Palin story. This is a warmer promise. Let’s dispense with the vitriol, this cover says, and really get to know Sarah Palin, what she’s been going through, and how she is learning what it means to be a big-time politician.
I’m not entirely comfortable with emotional responses to great issues, and this cover seems to me to be a win for Palin. Test yourself and look into her eyes. Judge the set of her mouth. Do you see the compassion of a mom, or the grit of a maverick politician who gets things done her way? (Either way, it’s a positive message for Palin. Michael Shaw of Bag News Notes has an interesting discussion of the psychological implications of the image.)
For my part, I am simply struck by the fact that Time cropped out the famous Palin hair-do, a visual way of saying, “Let’s get past the clichés.” But photography is not very good at that.—David Schonauer