As Jean-Jacques and I bring you reports from Perpignan, we'll tell you about our favorite of those exhibitions. We'll also try to give you a sense of what it's like to be here. One thing that inevitably happens when you put so many passionate professionals together is that the big questions start flying. Is photojournalism dying? Will these images have any impact since so few people every see them? What is the ultimate role of a festival like Visa pour l'Image? What will photojournalism look lik 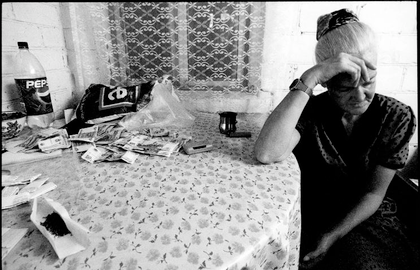 _ American Photo_ Editor at Large Jean-Jacques Naudet and I arrived Sunday night at this small town in the south of France that has become the epicenter of photojournalism over the past 20 years. Two decades ago Roger Thérond, the legendary editor of Paris Match, encouraged Jean-Francois Leroy and Michel Decron to create a festival devoted entirely to photojournalism, and Visa pour l’Image was born. No one thought it would work and the first year’s turnout was pitiful. Slowly, though, its attendance and importance grew, due in no small part to Leroy’s nonnegotiable, often radical, ideas about photojournalism.

Today Visa pour l’Image is singularly focused on remembering great photojournalists from the past and on providing a forum for the great photojournalists of today. As the anniversary year, 2008 promises to be a big one. There are 30 official festival exhibitions this year and many more “off festival.” As Jean-Jacques pointed out, it is also in times of crisis that the industry bands together. And in case you didn’t notice, photojournalism is having a bit of a crisis. One of the biggest problems for the industry is that magazines are struggling and thus there are fewer and fewer outlets for serious photojournalistic projects. After only our first day at the exhibitions we could see that one of the triumphs this year was Leroy’s petition to have magazines work with agencies to assign meaty photographic stories to their top photographers. The quality of that work, alongside the usual award-winning stories and important historical figures, has meant that this year’s exhibitions have been the most consistently impressive to date.

As Jean-Jacques and I bring you reports from Perpignan, we’ll tell you about our favorite of those exhibitions. We’ll also try to give you a sense of what it’s like to be here. One thing that inevitably happens when you put so many passionate professionals together is that the big questions start flying. Is photojournalism dying? Will these images have any impact since so few people every see them? What is the ultimate role of a festival like Visa pour l’Image? What will photojournalism look like in another 20 years? We’ll try to negotiate a few answers to these questions, too. As always, we’re interested to hear what you guys think.

The real crowds arrive in Perpignan on Wednesday, so we are making our best effort to see all the main exhibitions in the first two days. We saw more than half on Monday, but between viewing the exhibitions during the day and viewing the projections at night, I’m a little thin on time to actually write about them. So I’ll start with the main highlights:

Our first exhibition was Noor photographer Stanley Greene‘s story on the Silk Road for Russian Reporter Magazine (image above). Over the years Greene has made a name for himself going to places no one else would dare, and in doing so finding the true stories at the center of so many other issues we see covered every day. These beautiful images of the plague of opium and heroine that starts in Afghanistan and moves through Russia and the rest of the world succeed as both immediate documentary images and as haunting impressionistic metaphors. Maybe your first exhibition always sticks with you, but even after seeing so many other projects the first day, Greene’s images stand out as the standard by which the rest are judged.