How I Shot This Special 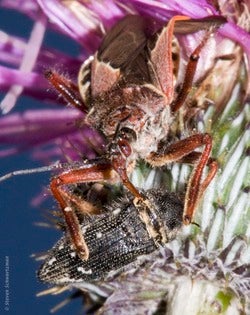 Steven Schwartzman send us these three nature images with explanations of what they are and how he got them. To see more of his work, visit his site: http://picasaweb.google.com/portraitsofwildflowers//

On April 30, 2006, I was driving along a rural road in the Texas Hill Country about 20 miles west of Austin when I pulled over to photograph some Texas thistles that were flowering. When I got close I saw that a little drama was playing out beneath the flowers. An assassin bug, Apiomerus spissipes, had already caught a beetle and had inserted a sword-like appendage called a rostrum into the beetle’s body. By the time I came on the scene, the assassin bug was sitting motionless and using its rostrum to suck out the beetle’s internal parts.
I took photographs of the little drama from several angles until, either because of my picture taking or because the assassin bug was just about done anyhow, it started to turn the beetle around. It may sound gross, but I was reminded of the way a person who is almost finished drinking a smoothie with a straw turns the cup around to suck up the last drops of liquid from the bottom. After that, the assassin bug quickly pushed the drained beetle off its rostrum and flew away.

More after the jump