On America’s Next Top Model, photographer Nigel Barker faces the fiercest fashion that Tyra Banks can throw at him. 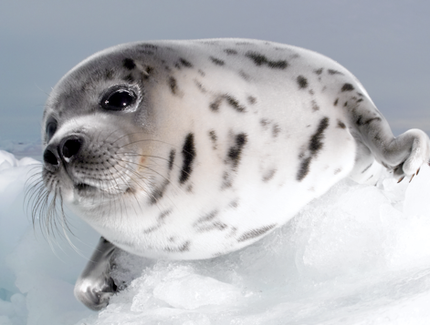 On America’s Next Top Model, photographer Nigel Barker faces the fiercest fashion that Tyra Banks can throw at him. But Barker came face to face with real ferocity recently when he went to Canada on behalf of the American Human Society Humane Society of the United States to photograph (and videotape) the annual hunt for seals hunt (Yes, it’s springtime, when the days grow balmy, blossoms appear, and men with spiked clubs kill baby seals.) Recently I went to see him at his Manhattan studio to look at his pictures and video clips, which were made on two separate trips to Prince Edward Island—one prior to hunt (see video clip here) and one during the hunt itself. Barker’s blog has some pretty dramatic images and tales about the two shoots. I think it’s brilliant of the Humane Society to enlist someone from the fashion world—the seals are killed for their desirable fur—who at the same time can document the practice.
The seal hunt got lots of negative publicity a decade or so ago, and a lot of people kind of assumed it was stopped. But according to National Geographic Canada’s “harvest limit” for 2008 was set at 275,000 harp seals, which is 5,000 more than in 2007. About 800 seals were killed on March 28.
Back to Barker: I don’t think I’ll spill too many beans by revealing that we are working on a story about him, which will appear in our September/October issue. (The whole issue will be focused on fashion.) He’s even shot an entire fashion story exclusively for AP. Those pictures, however, I will keep to myself for now. From his work on America’s Next Top Model, Barker has become one of the best-known photographer’s in the world. He also produced VH1’s reality show about up-and-coming photographers, called The Shot. I think our article will show him to be fairly fierce in his own right.—David Schonauer