Given the unsettling eerieness of Gregory Crewdson's photographs and their suburban settings, it's surprising that photographer grew up in Brooklyn with a self-described Crewdson told me a couple of years ago. 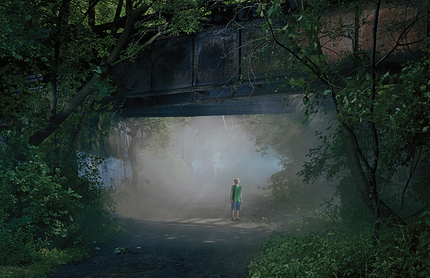 Given the unsettling eerieness of Gregory Crewdson‘s photographs and their suburban settings, it’s surprising that photographer grew up in Brooklyn with a self-described “normal” childhood. “Suburbia is like a foreign country to me,” Crewdson told me a couple of years ago. “I approach it as a literary place, an aesthetic setting rather than one of personal experience.”

Nonetheless, Crewdson has made that setting his own in elaborate images that manage to tell little stories yet often beg the question, “What’s going on here?” An influential photo professor at Yale, he creates large-scale photographs at a meticulous pace but keeps cranking them out: His most recent collection, Beneath the Roses, goes on view at New York’s Luring Augustine Gallery April 5 through May 3, as well as London’s White Cube April 23 to May 24 and LA’s Gagosian Gallery May 3 to June 4. Crewdson himself will be signing books at Luring Augustine from 2 to 5 pm April 12.

Accompanying the show is Crewdson’s newest book, Beneath the Roses (Harry N. Abrams, $60), in which the photographer adds some slushy winter elements to his subjects’ psychological coldness. As always, the detailed pictures show familiar scenes in which something is askance, the mood seems foreboding, the characters caught in an internal drama. “I like to take sort of ordinary iconography and defamilarlze it, make it mysterious,” Crewdson explains, “so there’s a tension between a sort of dream and reality, between the ordinary and the fantastical. But it’s always grounded in something real.”